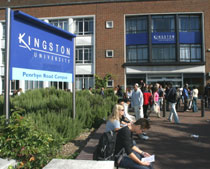 Kingston was one of four universities shortlisted for this yearâ€™s Sunday Times University of the Year award. The newspaper, which ranked 119 institutions in its university guide, described Kingston as â€œa vocational university with a fine teaching recordâ€ and praised the University for producing â€œsome of the best paid graduates in the UKâ€. In its comments on teaching quality, the paper said that few universities had more top-rated subjects. The guide also rated Kingston as being â€œamong the most dynamic of the modern universities.â€

Kingston, which was also shortlisted for the award in 2000, was included in the newspaperâ€™s overall table published on September 12. The guide also comprised several small tables measuring universities against a number of criteria. Within these tables, Kingston was ranked eighth in the top 10 new universities table, seventh for the percentage of students who go into jobs which require a degree and 15th for highest starting salaries. The University also featured in 16 of the subject tables for courses that were rated excellent. Kingston was placed 63rd overall.

Professor David Miles, Kingston Universityâ€™s Pro-Vice Chancellor for External Affairs and Business Development, said the accolade was reward for the hard work put in by teaching staff. â€œTo be nominated for the second time for this award and to be the only new university shortlisted confirms our standing among the best modern universities in the United Kingdom,â€ Professor Miles said. â€œKingston has always been proud of its reputation for teaching quality and the fact that so many of our students go straight into well paid, high-level positions proves that our teaching excellence translates into impressive graduate job prospects.â€