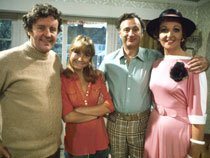 The rise and fall of the traditional English semi-detached house topped the agenda when Kingston Universityâ€™s Centre for Suburban Studies hosted its first major event yesterday. The Good Life conference, named after the popular BBC sitcom which first brought issues of suburban identity to the fore, was held at the Penrhyn Road campus.

Academics from around the country joined local government and town planning experts to explore some of the suburbia-related issues that first came into the limelight in the television programme. â€œThe Good Life, which made Surbiton in South West London famous, encapsulated the spirit of suburban life in Britain in the late 1970s but the lifestyle choices it reflected remain just as relevant today,â€ event organiser Dr Chris French said. â€œThe conference looked at these choices and, above all, challenged stereotypes of suburbia which can often be misleading.â€

Speakers at the conference included Dr Finn Jensen, from Liverpool John Moores University, who focused on the semi-detached house and how its popularity has decreased over time. Dr David Gilbert from Royal Holloway College, London, and Dr Rebecca Preston from the Geffrye Museum concentrated on the political leanings of suburbanites while other specialists discussed such issues as how suburbia is perceived by architects, novelists and the media.

The Universityâ€™s Centre for Suburban Studies opened in April, sparking a flurry of coverage in the media. Director Dr Vesna Goldsworthy hopes the conference will further promote the subject as a field of academic research. â€œSince the Centre was launched, weâ€™ve been amazed by the level of interest in our work, not just in this country but internationally. The conference is the first of a number of events planned for the coming year which we hope will really establish Kingston as a world leader in this area,â€ she said.