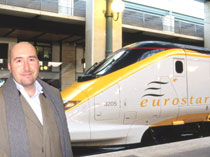 When fellow students quiz Robert Lewis about his travel arrangements to reach the Business Schoolâ€™s Kingston Hill campus, his answer usually takes them by surprise. For the 35 year old postgraduate thinks nothing of jumping on board the Eurostar for a cross-Channel commute from Paris. The reason for his journey is simple – Mr Lewis is convinced completing Kingstonâ€™s part-time Doctor of Business Administration is the perfect way to fast track his career.

The management lecturer at the ESC Rouen Business School in France has become quite accustomed to his Anglo-French expeditions. He commenced his travels visiting Kingston one weekend every month during the first year of his studies. Since then, his timetable has changed to accommodate meetings with his supervisors, Professors Christine Edwards and Katie Truss, four times a year.

Being based in France has not hindered Mr Lewisâ€™ progress. â€œIn fact, most of the work for this course is completed away from the University and students know they need to be highly motivated and disciplined to succeed,â€ he said. â€œLondon is only a couple hours away by Eurostar so Iâ€™m still able to have all the face-to-face meetings I need with my supervisors.â€ Regular telephone and email discussions have also helped him along the way.

Mr Lewis is completing an in-depth analysis of the impact of teleworking at his former employer, the Organisation for Economic Co-operation and Development, where he managed a number of home-based staff. â€œIâ€™m producing an argument in favour of teleworking, but I may find people are dissatisfied and would prefer to work in offices. Although teleworking would appear to have the ability to initially reduce stress levels, for example, it can also create the potential for longer working hours,â€ he said. Mr Lewis hopes his research will help him fulfil his ambition to specialise in international and expatriate human resources management.

Kingstonâ€™s Doctor of Business Administration was geared towards professionals who wanted to understand more complex management issues, Professor Edwards said. â€œRobert is one of a number of overseas students reaping the rewards of a course that allows them to produce high quality academic research related to real-life practice,â€ she said.