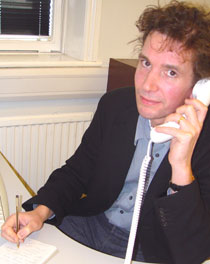 A war correspondent who has survived sniper fire and a kidnapping is sharing his talent for newsgathering with Kingstonâ€™s journalism students. Senior lecturer Hugh Barnes has reported from behind enemy lines in Afghanistan, the Balkans and Chechnya. He has previously worked for The Times, The Independent, the Financial Times and the BBCâ€™s World Service.

Mr Barnes lists his most frightening assignment as being taken captive in Afghanistanâ€™s Panjshir Valley while working for Agence France Press. â€œI expected to be in the country for six months so I was carrying thousands of dollars, which made me an obvious target,â€ he said. â€œIt was very unnerving having a gun pointed at my head but fortunately I was released after a couple of days.â€

War reporting was one of the most fundamental forms of journalism, Mr Barnes said. â€œReporters on the frontline have to go out there and get the stories themselves. There are no press releases to work from and few press conferences to attend. They must know how to gather news from scratch and present information clearly and concisely. Those are exactly the skills weâ€™re aiming to instil in our students at Kingston,â€ he said.

Also a novelist and expert on the Soviet Union, Mr Barnes is completing a PhD in English and Russian Literature at Cambridge University between his lecturing duties. His latest book, Gannibal: The Moor of Petersburg, a biography of Russian poet Alexander Pushkinâ€™s African great-grandfather, will be released in July.