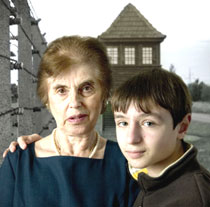 A Holocaust survivor relived one of the most shocking killing sprees in world history when she shared her account of imprisonment and terror with an audience at Kingston University. Rene Salt recalled her childhood in Nazi concentration camps during a visit to the Penrhyn Road campus last night. She was the guest speaker at a special event to commemorate the 60th anniversary of the liberation of Auschwitz, staged as part of a week of diversity and equality awareness-raising activity.

Mrs Salt, whose parents and younger sister perished at Hitlerâ€™s hands, described how she was living in a ghetto in her Polish hometown Zdunska Wola when the Germans tore her world apart. â€œI remember so vividly the night the Gestapo took my sister away – it is imprinted on my mind,â€ Mrs Salt, then aged 13, said. â€œThey forced the people from the ghetto into fields and began to separate the children. My mother hid me on one side and my sister on the other side under her coat. They uncovered my sister and I knew we would never see her again.â€ Along with hundreds of other children, Mrs Saltâ€™s sister was gassed at the Treblinka concentration camp.

Grief-stricken Mrs Salt was sent to another ghetto in Lodz with her parents and forced to work in factories. â€œConditions were overcrowded, people were starving and disease was widespread,â€ she said. â€œI contracted typhus and on my second night in hospital the Germans cleared the building out except for the infectious ward. The only reason I wasnâ€™t taken to an extermination camp then was because I was in that ward.â€ In 1944, Mrs Salt and her parents were herded on to a train to Auschwitz. She lived to tell the tale – her father was not so lucky. Mrs Salt and her mother later moved to the Belsen concentration camp, where they remained until it was liberated by British forces in 1945. Her mother died just 12 days later.

Earlier this year Mrs Salt, now 75, returned to Poland and Germany for the first time since the war to feature in the BBC documentary Grandchild of the Holocaust. The programme, which marked Holocaust Memorial Day, was narrated by her grandson Adrian. â€œI went back to my home town where I last saw my sister alive, then on to Auschwitz and Belsen,â€ she said. â€œThe only place I couldnâ€™t bring myself to visit was my familyâ€™s house.â€

Mrs Salt said her visit to the University was another important step in educating younger generations about the Holocaust. â€œI donâ€™t like talking about what happened, but I feel I have to,â€ she said. â€œSo many people in this country have never heard of Auschwitz and only by remembering the Holocaust can we prevent such an atrocity happening again.â€

Mrs Saltâ€™s visit marked the beginning of UNity Week, a programme of events to celebrate Kingstonâ€™s commitment to encouraging staff and students from a wide range of backgrounds to participate fully in University life. â€œReneâ€™s story reiterates the importance of tolerance and understanding of peopleâ€™s differences,â€ diversity
and equality manager Jan Stow said.