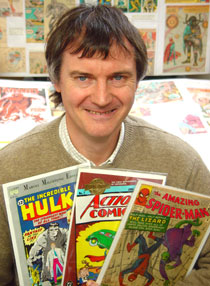 A lifelong comic fanatic has delved into his collection to explore the scientific roots of characters such as Superman, Spiderman and the Incredible Hulk. While many scientific discoveries are greeted with widespread acclaim, Kingston University sociology lecturer Dr Simon Locke has found that superheroes can also be used to portray breakthroughs in a more negative light. His research suggests that comic strip favourites have also reflected public scepticism about scientific advances since Superman first took to the skies in the 1930s.

Dr Locke has spent the past two decades investigating the topic after a childhood fascination with comic books sparked his interest in the subject. â€œI read my first superhero comic when I was four years old and now Iâ€™ve got thousands of them. As Iâ€™ve grown older, Iâ€™ve realised that comics carry a much deeper meaning about how society views scientific developments,â€ he said.

Supermanâ€™s first appearance in 1938 highlighted the publicâ€™s fear of the unknown. â€œAt this time people still didnâ€™t know what would happen if they left the Earthâ€™s atmosphere,â€ Dr Locke said. â€œSupermanâ€™s superior strength and resistance to physical injury was seen as an example of what humans might evolve into if scientists did go into space. The character epitomised everything good about the potential of space exploration but people were also afraid of the consequences.â€

More recently, the Incredible Hulk had emerged as a classic example of what could happen if a scientific experiment went wrong, Dr Locke said. The green-skinned Hulk was created when a scientist accidentally irradiated himself during his own gamma bomb test. â€œOn the one hand, modern society is structured around scientific developments and people are keen for scientists to find cures for diseases,â€ he said. â€œOn the other hand, it can be unpredictable and, in some cases, potentially dangerous. Certainly in the Hulkâ€™s case, the capability of science is portrayed as a source of trouble.â€

The next stage of Dr Lockeâ€™s research will examine the way mad scientists, including Supermanâ€™s arch enemy Lex Luthor, are portrayed in comic books.