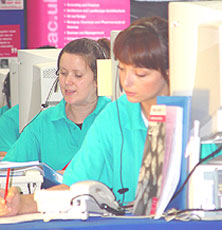 Competition for places at universities in the United Kingdom is expected to be hotter than ever this year as students try to secure a spot before the introduction of top-up fees in 2006. Kingston Universityâ€™s UK marketing manager Anthony Allen said he believed the looming implementation of fees was one of the major factors behind this yearâ€™s surge in applications. â€œWeâ€™ve already witnessed a heavy demand for many popular courses during the application process and thereâ€™s going to be incredibly fierce rivalry for the final few places next week,â€ he said. â€œWe anticipate many students will want to avoid paying extra fees and so are determined to enrol this year, rather than opting to take a gap year or defer their applications.â€ That meant more pressure than usual was likely to be placed on higher education hopefuls still intent on finding the perfect course when A-level results come out next Thursday, Mr Allen said. â€œThere are still opportunities for prospective students out there but they really need to be quick off the mark this year to avoid missing out on a place when Clearing hotlines open next week.â€

Mr Allen urged those students who were still mulling over their higher education options or subject choices to be ready to pick up the phones when they received their A-level results on August 18. Kingston Universityâ€™s Clearing hotline operators were primed to receive up to 6,000 calls from students eager to snap up the few remaining places on its courses once the lines opened at 8.30am on results day, he said. â€œClearing is a bit like a degree course sale, where students with the right entry points have a chance of gaining a place. As with any sale, itâ€™s important to be at the front of the queue, so itâ€™s vital A-level students donâ€™t leave making their phone call to the Clearing hotline until the last minute,â€ he said.

Alongside a general boom in higher education – the Universities and Colleges Admissions Service (UCAS) has received 30,000 more applications for full-time courses starting this autumn than it recorded in 2004 – Kingston University was also becoming a first-choice destination for an increasing number of prospective students, Mr Allen said. That trend meant fewer course places were available through Clearing than in past years. â€œKingston University has seen a 20 per cent rise on last year in firm acceptances from students prior to A-levels, while many students in the surrounding area are making Kingston their first choice so they can continue to live at home while theyâ€™re studying, to avoid racking up huge debts,â€ Mr Allen said. â€œThat makes it even more important that people considering calling the Clearing hotline act quickly.â€

UCAS applicants without a university place on August 18 will automatically be posted a Clearing entry form. However, they should not wait for it to arrive in the post, Mr Allen said. Instead, he advised students to draw up a shortlist of courses that interested them and get ready to contact the universities straight away. â€œAt Kingston, students will speak first to specially trained hotline advisers, who are all students at the University themselves,â€ Mr Allen said. â€œItâ€™s absolutely vital students going through Clearing keep calm, are well prepared and have their A-level and GCSE results to hand when they call.â€ Students with the right grades will be transferred through to academic staff after they have spoken to a hotline operator. Any who do not meet Kingstonâ€™s course criteria will receive advice about alternative courses, including two-year Foundation Degrees and HNDs run in conjunction with partner colleges in the region.