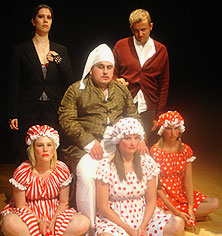 Three sinister wide-eyed Victorian dolls with rosy-apple cheeks create endless mischief in Kingston University theatre companyâ€™s revival of The Intruder, due to open at the Edinburgh Festival this month. The curtain goes up on the new production of Maurice Maeterlinckâ€™s darkly comic play and its twelve strong cast on 18 August in front of audiences at the cityâ€™s Hill Street theatre.

The Belgian playwrightâ€™s nineteenth-century Adams Family classic tells the tale of an oddball family and how they cope with tragedy as it unfolds all around them. The Universityâ€™s theatre company KUDOS will perform the play with two different casts appearing on alternate days, giving their own subtly different interpretations of the playwrightâ€™s original.

The Edinburgh-bound production has been a collaborative effort with director and actors feeding off each other. â€œMaeterlinck didnâ€™t give us a clear chain of events, so weâ€™ve interpreted his directions quite freely,â€ said director Steph Taylor. â€œWeâ€™ve turned it from a spooky gothic tale into a comical production with a dark edge. Itâ€™s an offbeat play thatâ€™s ideal to perform at Edinburghâ€™s fringeâ€ she said.

The action revolves around the relationships between the familyâ€™s three daughters, their father, auntie and grandfather. When death strikes, an air of madness begins to take hold and the characters transform into freakish parodies of themselves. â€œItâ€™s a manic play that builds pace as time speeds up,â€ assistant director Sara Flint said. â€œThe characters grow throughout, making them larger than life, exaggerating their emotions as events overwhelm them,â€ she said.

The rarely performed play, which has been in rehearsals for four months, involves the audience throughout. â€œThere are moments when we plunge the theatre into complete darkness, to heighten their senses,â€ Sara Flint said. Actor Mathew Dye, who plays one of the grandfathers said it was very energetic production. â€œIt really is physical theatre and you have to be quite fit,â€ he said. â€œThere are no props, so we have to make use of the whole space, and we lift and throw each other around a lot.â€

Charlotte Johnson, who plays one of the aunties, said the cast have really given it their all. â€œItâ€™s been great for us as actors because weâ€™ve been on a very long leash,â€ she said. â€œWeâ€™ve been able to give our own input to help shape the show and thatâ€™s been very rewarding.â€

The Intruder can also be seen on its return from Edinburgh at Kingston University in late September.