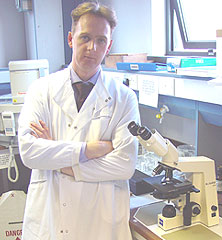 A breakthrough in human stem cell research, producing embryonic-like cells from umbilical cord blood may substantially speed up the development of treatments for life-threatening illnesses, injuries and disabilities. The discovery made during a project undertaken with experts from the University of Texas Medical Branch and the Synthecon Corporation in the United States provides medical researchers and physicians with an ethical and reliable source of human stem cells for the first time.

The study, funded by the UK Governmentâ€™s Department of Trade and Industry, is led by Dr Colin McGuckin and Dr Nico Forraz from Kingston Universityâ€™s School of Life Sciences. It represents a significant step forward in the fast-developing field of stem cell research. Until now, experts have struggled to find a supply of cells in sufficient numbers that does not offend previous critics of stem cell research. The latest advance looks set to overcome such difficulties. 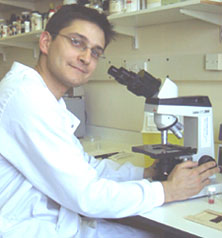 The trans-Atlantic team has been working with Drs Randall Urban, Larry Denner and Ronald Tilton from the University of Texas Medical Branch in Galveston. They have been using bioreactors at the Synthecon Corporation base in Houston enabling them to produce stem cells sharing many of the same characteristics as cells found in embryos. Research has so far relied on so-called adult cells found in blood and bone marrow from birth onwards or cells grown from embryos. The new type detected by the team harnesses the benefits of both. â€œWe have found a unique group of cells that bring together the essential qualities of both types of stem cells for the first time,â€ Dr McGuckin said.

The researcherâ€™s findings may bring renewed hope to people awaiting treatment for a range of serious illnesses such as Diabetes, Alzheimerâ€™s Disease and multiple sclerosis. â€œAcquiring stem cells from embryos also has major limitations because it is difficult to obtain enough cells to transplant as well as getting the right tissue type for the patient,â€ Dr McGuckin said. â€œUsing cord blood gets over that obstacle because we can produce more stem cells and, with a global birth rate of 100 million babies a year, there is a better chance of getting the right tissue type for the many patients out there waiting for stem cell therapy. There is also far less likelihood of such cells being rejected when they are transplanted into people with liver disease, for example.â€

The team has taken its first steps towards proving its claims by growing defined liver tissue using the new cell type. By making use of special NASA-derived technology, the team is able to cultivate greater numbers of cells in equipment mimicking the effects of space microgravity. â€œUsing Syntheconâ€™s bioreactors, originally designed by NASA, means the cells are able to expand faster, giving us a greater supply to work with,â€ Dr Forraz said. â€œThis system provides more cells for more tests, so we have the potential to make significant progress in applying the new cells to cure difficult to treat conditions such as juvenile diabetes, stroke, heart and liver disease.â€

Dr Urban who chairs UTMBâ€™s Internal Medicine department and serves as director of its Stark Diabetes Centre said he looked forward to the next phase of what was proving to be a fruitful collaboration. â€œWe plan to use this technology to engineer pancreatic tissue as we work towards our goal of developing a cure for type 1 diabetes,â€ he added.

The teamâ€™s report will be published in the Cell Proliferation Journal on 18 August.