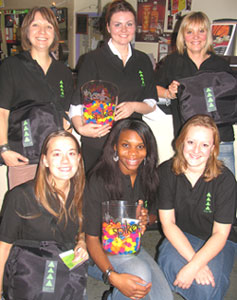 A group of Kingston University students is taking to the streets this week on a mission to help other young people enjoy a safe festive period. The students will be targeting Kingstonâ€™s busiest pubs and nightclubs for two evenings a week in the run-up to Christmas, giving out information on sensible drinking and the dangers of taking drugs.

The activity is all part of the Switch On campaign, which has seen the Studentsâ€™ Union team up with Kingston Universityâ€™s Health and Counselling Service to encourage students to stay healthy and safe during their degree courses.

University health and counselling adviser Elizabeth Field said having young people delivering the message to others their own age was likely to have an enormous impact. â€œItâ€™s only natural that young people enjoy socialising and having a good time,â€ she said. â€œWhat weâ€™re doing with Switch On is spreading awareness about possible dangers of drinking to excess in a really friendly, approachable way. Itâ€™s all about minimising risks and doing a few simple things to make life a bit safer, such as drinking water between alcoholic drinks and ensuring groups of friends stay together and make sure everyone gets home safely.â€

The student volunteers will team up with workers from Kingston Councilâ€™s Drug and Alcohol Action Team when they take to the town centre to hand out pocket-sized information packs. Advice in the packs includes simple tips for enjoying a night out such as not accepting drinks from strangers and keeping a list of telephone numbers for reputable taxi firms. The team will also be distributing brightly-coloured plastic tops called spikies which fit in the top of a bottle of alcohol to prevent a drink being spiked. â€œThe spikies always create a bit of interest, which is a good way of breaking the ice when the students first go into a pub,â€ Ms Field said. â€œSome young people probably donâ€™t realise that, just by being in a nightclub, they are potentially vulnerable to dangers such as drink-spiking and therefore vulnerable to more serious crimes such as rape as well.â€

The project also has the backing of the Kingston Police, who have funded the student volunteersâ€™ information packs. Studentsâ€™ Union Vice-President for Student Support Chris Ford said it was exciting to see the University, its students, the council and police all joining forces for the benefit of the wider community. â€œSwitch On is all about working as a team to promote a safer, healthier and more enjoyable lifestyle for every young person in Kingston,â€ he said.

Studentsâ€™ Union volunteering development co-ordinator Catherine Attridge said the volunteers would also gain a huge amount in personal terms from taking part. â€œThis sort of voluntary work will help build confidence and communication skills, which could play a big part in helping them stand out from the crowd when the time comes to apply for jobs,â€ she said.