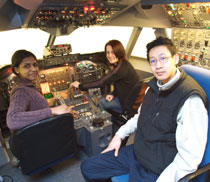 Journalists and photographers descended on the Universityâ€™s Roehampton Vale campus earlier this week for the first public viewing of its new aircraft simulator. The Boeing 747 fixed-based simulator is playing a vital role training students on the Foundation Degree in Aircraft Engineering. The simulator flight deck was purchased from British Airways and installed late last year.

Senior lecturer Philip Smith, who joined the University two years ago after more than 30 yearsâ€™ service at British Airways, said the simulator was an invaluable training facility. â€œStudents are able to practice any ground maintenance function from an engine start to an autopilot test,â€ he said. â€œWe can even introduce defects to the aircraft system and ask the students to find and resolve the problems.â€

The simulatorâ€™s arrival coincides with the launch of a new University partnership with British Airways. Later this year, students will be able to complete the Foundation Degree in Aircraft Engineering at BAâ€™s Heathrow Airport engineering base. The degree is already delivered at KLM Engineering in Norwich and Newcastle Aviation Academy and is validated by the City of Bristol College. Kingston is recognised by the Institute of Transport Management as a European centre of excellence in aircraft engineering and training.