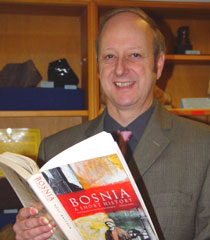 Bosnia-Hercegovinaâ€™s progress establishing its own identity following the end of the Balkan conflict has been put under the microscope in a new study. Political geography expert Professor Guy Robinson has been exploring the aftermath of the bloodshed of the 1990s and its effects on the reconstruction of the state. His research, carried out in conjunction with the University of Sarajevo, has included a visit to Bosnia-Hercegovina funded by the British Academy.

The capital city Sarajevo, populated largely by Muslims, had undergone some interesting transformations, Professor Robinson said. Examples included the replacement of all street names associated with Serbia and other parts of the former Yugoslavia. â€œThe city has selected parts of its history that it wishes to celebrate,â€ he said. â€œNames of artists, poets and other prominent Muslim figures dating back to the 15th Century now feature around the city. Street signs in the Serbian Cyrillic alphabet have been replaced by those using the Latin alphabet. Even the Princip Bridge, named after a Serb who assassinated Austrian Archduke Franz Ferdinand in 1914, has been renamed the Latin Bridge.â€

Although the Muslim and Croat communities have formed a post-war coalition, memories of the two groups clashing in the town of Mostar during the war remain fresh in many peopleâ€™s minds. Professor Robinson found little place for Muslim culture in the Croat-dominated region of Hercegovina. â€œIt was like being in a different country. The Croatian currency is used instead of the Bosnian marka and the Croatian flag is flown,â€ he explained. â€œThe aftermath of ethnic cleansing is evident in several parts of the country. This and other legacies from the war, including a large refugee population, are making it difficult for the nation to fully recover.â€

Professor Robinson, who is based at the Universityâ€™s School of Earth Sciences and Geography, is keen to present his findings to the European Unionâ€™s High Representative for Bosnia-Hercegovina, Paddy Ashdown. â€œI hope highlighting some of the complex social, economic and political issues affecting the country will give its governing body a clearer idea about the way to move forward,â€ he said.