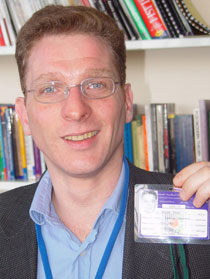 A researcher from the School of Social Sciences has lent his expertise to a European Union mission to oversee the Palestinian presidential election. Hamish Nixon was one of 277 observers deployed to ensure the late Yasser Arafatâ€™s successor was chosen democratically. Mr Nixon witnessed the polling, counting and totalling of results at last monthâ€™s ballot, which saw Mahmoud Abbas elected as Palestineâ€™s new leader.

Teaming up with a member of Maltaâ€™s foreign ministry, Mr Nixon observed polling stations in West Bank towns Tubas and Jenin. He met local authorities and security forces in the lead up to election day before visiting 16 polling stations. â€œWe had a checklist to ensure correct procedures were followed, particularly during vote casting and the counting of results,â€ Mr Nixon said. â€œWe did not interfere in the election itself but had the power to collect information on anything that might affect its impartiality.â€ 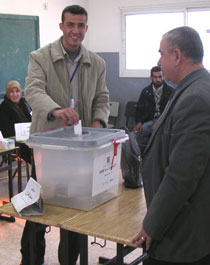 The observersâ€™ presence increased confidence in the legitimacy of the election but a truly free process was difficult to achieve, Mr Nixon said. â€œThe political situation in the Palestinian territories meant that some voters could not exercise their voting rights, particularly in East Jerusalem,â€ he said. â€œLast minute changes for voting at special polling stations also meant that correct procedures were not always followed, despite local electoral authoritiesâ€™ efforts to ensure a fair ballot.â€ These observations were discussed at European Union de-briefing in Jerusalem, he added.

Mr Nixon also participated in election missions to Indonesia, Russia and Serbia and Montenegro last year. He said he would encourage students on the Master in International Conflict Management to follow in his footsteps. â€œI was selected by the European Union because I have a strong interest in elections, while others have specific knowledge about a particular country. Itâ€™s an opportunity available to people working in this field at some stage in their career,â€ Mr Nixon said.