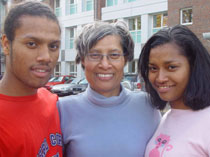 When Jahan Cedenio started his Kingston University course, there was one fellow Fresher on hand who really knew how to help settle his nerves. While the 19 year old was enrolling for his media and cultural studies degree, his mother, Pandora, was busy signing up for similar studies of her own at the Faculty of Arts and Social Sciences.

Jahan, who still lives with his family in Epsom, admitted it was strange seeing his mother, now studying criminology with media and cultural studies part-time, around the Penrhyn Road campus. â€œI knew Mum was considering going back to her studies but I didnâ€™t discover she was going to Kingston until after Iâ€™d applied,â€ he said. â€œSitting near my Mum in lectures will take some getting used to but Iâ€™m sure weâ€™ll be a lot of support to each other completing our assignments.â€

A former psychiatric nurse, Mrs Cedenio has returned to the textbooks more than 30 years after leaving school in her native Bermuda. She opted for the Kingston course after developing a fascination with the criminal justice system and public order issues. â€œThis is such an exciting opportunity – one that I really thought had passed me by,â€ she said.

Jahan has been quick to come to the rescue of his mother as she contends with the complexities of using a computer for the first time. â€œHeâ€™s already given me some pointers on using the internet and the Blackboard learning management system and itâ€™s great to have him on hand if I have any questions,â€ Mrs Cedenio said. â€œIf Jahan ever needs any advice or guidance, Iâ€™ll always be there for him as well.â€

The Cedenio family also has another affiliation with Kingston. Mrs Cedenioâ€™s daughter, Javaria, is an adult nursing student at the Universityâ€™s Faculty of Heath and Social Care Sciences.