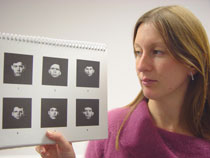 A Kingston psychologist is eyeing up more effective ways to help police officers bring criminals to justice. Dr Rachel Wilcock from the School of Social Sciences is investigating ways of improving eyewitnessesâ€™ performance when they view identity parades.

Previous research into the accuracy of eyewitness testimonies had tended to focus on adults between 18 and 30, Dr Wilcock said. However, in an ageing society, it was inevitable that a growing number of older adults would become witnesses to crime. â€œIn an earlier study I found people aged between 60 and 80 were more liable to make false identifications, pointing out an innocent person when presented with a line-up that didnâ€™t include a suspect,â€ Dr Wilcock said. â€œResearch has already shown that asking younger witnesses in advance whether they would be able to reject a line-up that did not contain an offender reduces the likelihood of error. I want to see if the same holds true for older witnesses.â€

In the latest study, adults aged between 18 and 30 and 60 and 80 will be asked to view a mock crime on video. After a short delay, participants will either view a trial line-up or be asked questions in an attempt to persuade the older adults to take extra care during the actual process. â€œHolding a practice has been shown to reduce the number of false identifications made by child witnesses, so we want to see if it can also improve accuracy among the older age group,â€ Dr Wilcock said.

The results of the research are likely to be used to advise the police about ways to increase accurate identifications. â€œThe outcome is crucial because evidence relating to eyewitness identification carries enormous weight in the courts,â€ Dr Wilcock said.