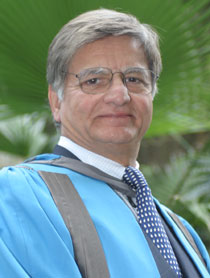 The man who helped make chicken tikka masala Britainâ€™s favourite dish has just received an Honorary Doctorate of Business Administration from Kingston University. Sir Gulam Noon, one of the countryâ€™s most successful entrepreneurs, took time away from the kitchens of Noon Products in West London this week to collect the award at Kingston Universityâ€™s Faculty of Business graduation ceremony.

Noon, as he prefers to be called, founded the family business that specialises in frozen and chilled Indian meals in 1989. His company now operates the largest factory in the world for ready-made Indian meals. Graduates and academics assembled at Tuesdayâ€™s ceremony at the Barbican Centre in London heard how Noon had been appalled by the poor standards of Indian food when he first arrived in Britain. â€œI wouldnâ€™t eat it and I knew then that this was a market I had to address,â€ he said. â€œAnd, yes, I plead guilty to making chicken tikka masala the nationâ€™s favourite.â€

Noon has devoted his life to the food business after inheriting his fatherâ€™s company in Mumbai when he was 17. â€œMy father died when I was very young and, as much as I have loved working in business, I always regretted not being able to go on to higher education. That is why I am so delighted by the honour bestowed on me by Kingston University,â€ he said. â€œEducation is crucial for all young people. It opens minds, doors and opportunities. I would say to all young people to get a good education and follow your dream. If you donâ€™t have a dream, how will it come true?â€

Noon has added his Kingston University accolade to a growing collection of honorary degrees. Surrey, Middlesex, Guildford and Birmingham Universities have also recognised him for his business expertise. He believes Britain has some of the best schools and universities in the globe. â€œUniversities like Kingston are the Mecca of world education. I would urge all parents to ensure they make the most of the opportunities on offer,â€ Noon said. â€œAs the father of two daughters, I am particularly interested in the education of girls. It is vital girls are given the same opportunities as boys. I believe firmly in the Indian saying that if you educate the girl, you educate the family.â€

As well as serving as chairman of Noon Products, Noon is also managing director of Bombay Halwa Ltd. He founded the Asian Business Association, of which he is a former chairman and board member, and, in 1998, was awarded an outstanding lifetime achievement award by the Asian Business Network. He is an active fundraiser for The Princeâ€™s Trust and a trustee of The Arpana Charitable Trust UK, which raises funds for the underprivileged in rural India. He also sits on the board of CARE International and is a member of Cancer Research UK. Noon received an MBE in 1996. He was knighted in 2002.

The Dean of the Faculty of Business, Professor Gwyneth Pitt, said Kingston University was proud to recognise Sir Gulamâ€™s outstanding contribution to business and education. â€œAs an industrialist and philanthropist, Sir Gulam Noon is an inspiration to any young graduate starting out in business,â€ she said. â€œHe has combined a hugely successful business with a commitment to the wider community, as demonstrated in his wide range of charity work. In particular, he has championed the importance of education for children and young people, opening up a world of possibilities to them.â€