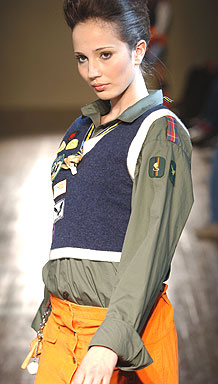 A chance discovery of a 1950s American scout shirt at Camden Market has acted as the trigger for a Kingston University studentâ€™s final year clothing collection. Kristen Tonge has designed a colourful womenswear range, which features neckerchiefs, badges and toggles, aimed at the teenage market.

The industrious 22 year oldâ€™s contemporary take on scout gear grew out of her self-confessed fascination with uniforms and their design possibilities. Kristenâ€™s collection includes a cream tailored boating jacket, dungaree dress in cord denim and a padded waistcoat with a back panel emblazoned with a map. â€œIâ€™ve gone for a layered look, she said. â€œThe jacket can be worn over a hooded top and Iâ€™ve made a small navy tank top that could go over an over-sized khaki manâ€™s shirt.â€

Kristenâ€™s range is designed to be interchangeable. â€œIâ€™ve deliberately avoided creating matching outfits, because clothes arenâ€™t meant to be worn like that,â€ she said. â€œInstead Iâ€™ve devised a variety of individual pieces able to be swapped to co-ordinate with different garments.â€ As part of her research for her collection, which was one of the highlights of the universityâ€™s annual fashion show in June, she spent Â£100 hunting down badges on eBay.

From Brigg in Lincolnshire, Kristen originally had her heart set on becoming a ballerina before realising she had a natural flair for fashion after sketching her first clothing designs when she was just 10. The promising young student has since picked up several awards. She was the winner of Kingston Universityâ€™s Dewhirst-sponsored Most Promising Student of the Year Award in both 2003 and 2004. She was also a finalist in the British Fashion Council Reiss Project this year after designing a retro range which created a funkier new look for the high street retailerâ€™s younger customers.

Kristen has now landed herself a prize job as womenswear designer at major United States fashion label Abercrombie and Fitch. She is still on a high about clinching the sought-after design role at the company headquarters in Columbus, Ohio. â€œIt is an excellent company to work for and I couldnâ€™t have hoped for a better first job,â€ she said.