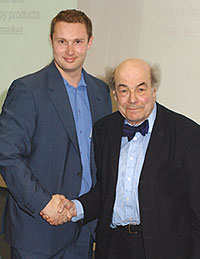 Three Kingston students have won Â£1000 each for their innovative business ideas as part of a competition to encourage entrepreneurial thinking amongst students. Gareth Kemp, Lee Powney and Osian Batyka-Williams were among the 10 winners of the Bright Ideas contest run by the WestFocus Entrepreneurial Centre, which was open to students from seven universities across west London. Judges included the chief executive of Kingston Chamber of Commerce Lisa Gagliani and managing director of Kingston Innovation Centre Christopher Fogg.

The Bright Ideas initiative, aims to provide students with the support they need to turn their ideas into a reality. The competition attracted 120 entries from students studying subjects as diverse as economics, design, engineering, business and health sciences, a quarter of which came from Kingston University. Scientist, inventor and TV veteran Professor Heinz Wolff praised the future business barons and invited the winners to pitch their ideas to the audience of 200 guests at the University of Westminster.

MBA student Gareth Kemp scooped an award for his idea to import mother and baby products from Italy including a baby hammock that rocks infants to sleep. â€œThe competition has been extremely useful,â€ he said. â€œIt encouraged me to gather my thoughts together and believe in my own ability as an entrepreneur. To have a group of independent experts tell me I had a business idea that could really take off meant a great deal to me.â€ Keen to make headway with his plans, Gareth has already taken the first step by spending his winnings on patenting his ideas and registering his business plan as a limited company.

MA in Business student Lee Powney received his prize for offering a solution to the sales and distribution problems of independent film companies. â€œBeing recognised by the Bright Ideas judges adds professional credibility to our endeavours. After I collected my prize I was approached by three business people in the audience who were eager to find out more about my business proposal,â€ he said. Lee has already spent some of his prize money on market research to discover just how feasible his ideas are. He plans to pursue his business goals further as soon as he finishes his contract with data solutions company Mekon, where he has been working on a project to enhance customer focus.

Final-year product and design student Osian Batyka-Williams put forward an idea for an ethical furniture company that would recycle waste as raw material to create new products. Taking one of the top prizes had bolstered his confidence he said. Runner-up prizes went to another 15 students including third year business management student Van Le, for his idea to create cost-effective advertising for small businesses.

Bright Ideas is just one programme run by WestFocus - a collaborative partnership of seven universities that offers an integrated programme of support, research and advice to businesses and social enterprises across south west London and the Thames Valley.

Martha Mador, project manager of the WestFocus Entrepreneurship Centre applauded the Bright Ideas winners for the strength of their ideas. â€œIt takes courage to present your ideas to critical eyes and the entrants showed they had the mettle to do so,â€ she said. â€œThe competition is just the first step and these ideas need further development, but ultimately we expect Bright Ideas to kick start some exciting new businesses,â€ she said.