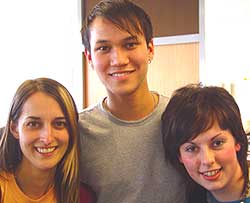 Three Kingston University fashion students have clinched top jobs at American clothing giant Abercrombie and Fitch. Mark Taylor has landed a post as a menswear designer at the companyâ€™s headquarters in Columbus, Ohio, where he will be joined by coursemates Emma Gudgion and Kristen Tonge, who specialise in womenswear. The trio will head to the United States next month.

Mark, who was born in Kent but lived in Indonesia and Washington DC before moving back to England with his family five years ago, impressed Abercrombie and Fitch after assisting with the launch of its Ruehl label last summer. â€œI helped the designers working on a new sportswear range including shorts, trousers and jackets and it was an amazing experience,â€ the 21 year old said. â€œI actually have a couple of Abercrombie tops hanging in my wardrobe at home and I canâ€™t believe that other people will soon be walking around in clothes Iâ€™ve designed for the company.â€

Kristen, from Brigg in North Lincolnshire, also proved her talent to company bosses on a work placement at the companyâ€™s Ohio base last summer during which she designed womenâ€™s shirts. She is now gearing up to work as a womenswear designer on the firmâ€™s Hollister range next month. â€œTheir surf-style collection suits me down to the ground because I love to produce garments that are bold, colourful and use a lot of graphics,â€ Kristen said.

Emma, meanwhile, is about to become an assistant womenswear designer on the companyâ€™s Ruehl collection. â€œIâ€™ve always dreamed of working in the United States so I jumped at the job offer,â€ the 23 year old, from Moggerhanger in Bedfordshire, said. â€œMy favourite designers are American and I canâ€™t wait to get started.â€

Course director Elinor Renfrew isnâ€™t surprised that her students are in such high demand. â€œWe prepare them for the realities of working in the industry and provide them with the skills they need to succeed,â€ she said. â€œAs Mark, Emma and Kristen have proved, our students are reaching an extremely high standard which means they stand an excellent chance of being offered design positions anywhere in the world.â€

The designs that caught the Abercrombie and Fitch bossesâ€™ eyes go on display at the Banqueting House in Londonâ€™s Whitehall tomorrow (June 15) when Kingston University stages its annual fashion show. Markâ€™s menswear collection is centred on an apron theme, while Emmaâ€™s has been inspired by her late Faroese grandmother. Kristen will be presenting a range based on uniforms and badges worn by scouts.