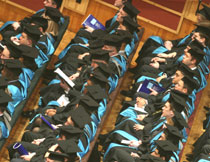 A business qualification designed to propel administrative staff further up the career ladder has produced its first graduates. After two years of combining lectures with the demands of their working lives, students on the Universityâ€™s Foundation Degree in Business and Professional Administration donned gowns and mortarboards to collect their certificates at a ceremony in central London.

Course director Deborah Pinder-Young said the part-time programme gave administrators without a degree the chance to gain a formal academic qualification closely connected to their jobs. â€œThe course is targeted at people with responsibilities ranging from clerical duties to senior supervisory roles,â€ she said. â€œTypically people signing up for the programme have not had an opportunity to move on to higher education after leaving school but have realised further down the line that theyâ€™d like to do so while continuing to work.â€

The first 18 course members combined their Kingston studies with jobs at such organisations as the London Ambulance Service, Heathrow Airport and BUPA. The group even included a member of the Welsh Guards responsible for scheduling the bandâ€™s engagements.

The Foundation Degree had benefits for both students and employers, Ms Pinder-Young said. Three-quarters of the graduates had been promoted as a direct result of what they had learned. â€œAdded to that, they have all taken increased confidence and fresh ideas back to their workplaces,â€ she said. â€œThe success of their two years of study proves conclusively that age, gender and social background are no barrier to completing a degree.â€ The programme is delivered by the Kingston Business School in partnership with Kingston, Richmond upon Thames, South Thames and West Thames Colleges.