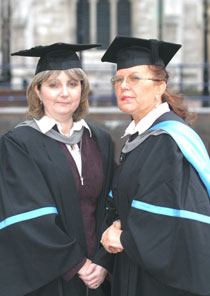 Two long-serving University staff members found themselves right at the top of the class when they graduated from the Foundation Degree in Business and Professional Administration. Natasha Reid and Paula Quinn both received awards of distinction, recognising the high standards they had shown during their two yearsâ€™ study.

Siberian-born Natasha is a Socrates-Erasmus administrator and financial assistant in the Department of External Affairs. She had always wanted to study for a degree but, because her parents could not afford to send her to university, pursued secretarial qualifications instead. Natasha moved to England in 1988, joining the University a year later, and jumped at the opportunity to sign up for the work-based Foundation Degree when it was launched. â€œDoing the course part-time was hard work but my colleagues supported me every inch of the way,â€ she said. The programme demonstrated the Universityâ€™s commitment to lifelong learning, Natasha added. â€œLong-serving employees are often the driving force behind companies and that is certainly true of the University. Giving staff an opportunity to develop themselves further definitely improves working environments,â€ she said.

Paula, meanwhile, is an administrative officer at the Kingston Business School. She originally trained as a nurse at Kingston Hospital after leaving school before starting her family. On her return to work, Paula opted for a new career in administration, working as a medical secretary before joining the University in 1996. The move spurred her ambitions to gain a degree for herself. â€œI always wished Iâ€™d gone to University so enrolling for the Foundation Degree was my second chance,â€ she said. â€œThe programme covered such topics as human resources, personal development and finance and Iâ€™ve acquired a new range of skills that help me in my everyday work.â€

Natasha and Paula have no plans to pack away their textbooks just yet. They have both decided to embark on another year of study to top up their qualification to an honours degree.