Scholar flies the flag for Brunei

Scholar flies the flag for Brunei 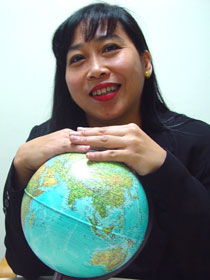 Siti-Salwah Haji Saim had three very special reasons to make the most of her studies when she was awarded a prestigious international scholarship to attend Kingston University. The high-flying career woman was determined to use the experience to set a good example for the tiny son and two young daughters waiting for her back home in Brunei.

The global relations specialist for Citibank remained true to her word. Siti has now added a Kingston MA in Marketing to her credentials after a year in the United Kingdom as part of the Chevening scholarship scheme. â€œIt was such an honour to be chosen that I resolved to make every minute count despite it meaning being away from my children,â€ she said. â€œI got through it by telling myself that my achievement was not only for myself but for them.â€

The first Chevening scholar from Brunei to study at the Kingston Business School, Siti adapted easily to the challenges of her course. â€œI was amazed to find myself working alongside a real mix of people from other countries,â€ she said. â€œThe opportunity definitely opened my eyes, not just academically but also to the way people from different nations can benefit from working together.â€ Those lessons stood Siti in such good stead that she even found herself picked to attend a United Nations convention in New York towards the end of her studies. She joined a select group of 27 Chevening scholars at the week-long event organised to assemble the finest young minds from around the globe.

Siti, whose studies were also sponsored by Brunei Liquefied Natural Gas, rates Kingston University as being in a league of its own. â€œI really want to encourage more students from my country to study at the university. Coming to Kingston has been a real boost for my career and Iâ€™ll always be grateful to the staff and other students for their support helping me make it my home away from home,â€ she said.

Course director Debra Riley said Siti had proved an outstanding student. â€œShe was extremely diligent and interested in everything that was going on around her. Her positive attitude really is an example to all working mothers.â€

Funded by the British Government and run by the British Council, the Chevening scholarship programme is open to students from more than 150 countries. The awards recognise individuals with a track record of academic and industry success able to demonstrate how new skills will benefit their home countries.