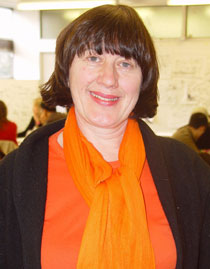 A Kingston design expert has rubbed shoulders with royalty at a special event staged to celebrate the achievements of Britainâ€™s creative industries. Professor Catherine McDermott joined 400 guests invited to a Buckingham Palace reception honouring their contribution to art and design.

The head of Kingstonâ€™s MA in Curating Contemporary Design, Professor McDermott was introduced to the Queen by Design Council chief executive David Kester. â€œShe asked about the Universityâ€™s range of courses and was particularly interested to know about what Kingston graduates go on to do,â€ Professor McDermott said. â€œThe Queen clearly recognised the role institutions such as Kingston play in helping the next generation of designers make their mark.â€

Other VIPs on the Palace guest list included Kingston alumnus Jasper Morrison, London Eye designers Julia Barfield and David Marks and fashion supremo Sir Paul Smith. â€œIt was a huge honour to mix with some of the worldâ€™s leading designers,â€ Professor McDermott said. â€œIâ€™ve spent more than 20 years teaching and practising design history, but I was asked to the Palace largely because of the MA programmeâ€™s success. The invitation was confirmation that Kingston University is widely recognised as a major force in design education.â€

Kingstonâ€™s curating alumni have gone on to work for such industry giants as the V&A Museum and product design firm IDEO.