Students urged to get on board new British Airways course

Students urged to get on board new British Airways course 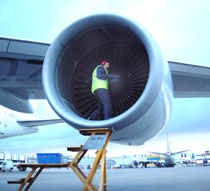 Kingston University is offering the next generation of engineers a passport to a career carrying out aircraft safety checks. Potential students now have the chance to apply to complete Kingstonâ€™s Foundation Degree in Aircraft Engineering at British Airwaysâ€™ Heathrow Airport base. The two-year programme, which begins in July, will see 20 students training alongside qualified engineers at Heathrow. It also offers participants the chance to gain a European Aviation Safety Agency (EASA) pt-66 licence, putting them firmly on course for professional engineer status.

Senior lecturer Philip Smith said students would learn how an aircraft actually worked. They would master the finer points of aircraft component and equipment replacement and fault diagnosis. â€œInitially they will use fixed-based simulators at Heathrow to practice basic maintenance functions ranging from engine starts to autopilot tests,â€ Mr Smith said. â€œAs they become more experienced, they will get to work alongside qualified engineers to carry out actual repairs in the hangar.â€

British Airways engineering training delivery manager John Quinlisk said the course would produce a steady stream of licensed engineers. â€œThere are only 20,000 fully qualified aircraft engineers worldwide and our partnership with the University gives students the opportunity to join an exclusive club,â€ he said. Aircraft engineering was an incredibly rewarding career, Mr Quinlisk added. â€œItâ€™s really satisfying to solve a technical problem on a highly sophisticated aircraft which will carry hundreds of passengers,â€ he said. Students successfully completing the Foundation Degree and obtaining the appropriate licence credentials might even be considered for further two-year training contracts at British Airways. The additional experience would give them advanced practical knowledge necessary to become fully qualified engineers, Mr Quinlisk said.

The collaboration with British Airways was a major coup for the University, Head of the School of Engineering Dr Peter Mason said. â€œThis is a wonderful opportunity for tomorrowâ€™s aircraft engineers to learn their trade at one of Europeâ€™s leading airlines,â€ Dr Mason said. â€œThe University is already recognised as a leading provider of aircraft engineering education and linking up with British Airways has further strengthened our position in this sector.â€ Kingstonâ€™s Foundation Degree in Aircraft Engineering is also delivered at KLM Engineering in Norwich, the City of Bristol College and at the Newcastle Aviation Academy.