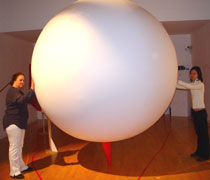 Golf lovers lined up alongside art enthusiasts for a recent exhibition at the Stanley Picker Gallery. Students on the Universityâ€™s MA in Art and Space course recreated one of the worldâ€™s favourite pastimes down to a tee in their Mini Golf Cinema exhibition. The March show gave a hole-by-hole account of the sportâ€™s history since its original heyday in the Depression era.

Gallery-goers entered the exhibition through a specially constructed wooden ticket office before setting off on the course where they were greeted by a giant inflatable golf ball. A film of comic clips about the sport, including excerpts from hit TV shows The Simpsons and The Sopranos, proved particularly popular with visitors during the round. Play finished with a final putt at the 19th hole – a lounge bar built in tribute to golfer Chi Chi Rodriguez, who was born in 1935.

The exhibition was inspired by the sharp decline in audience numbers at public cinemas in the United States during the 1930s. â€œThere was a sudden need to make these vast complexes viable businesses and people began re-using cinemas for a variety of other leisure activities,â€ student Margi Collard said. â€œIndoor mini golf became a popular choice with the public because it was such a cheap activity.â€
Fellow student Tanny Wong said her coursemates wanted the exhibition to be more than just a visual experience. â€œIt emphasised the importance that mini golf played as a leisure pursuit during the era when the Great Depression hit America hard,â€ Tanny said. â€œAbove all, it reflected the fact golf is a sport and pitting your wits against others is half the fun.â€ Visitors with a creative streak could enter a competition to decorate their own golf ball, with a top-of-the-range putter first prize.

Stanley Picker Gallery director David Falkner said the exhibition was one of the most interactive the Gallery had ever hosted. â€œIt was an innovative way of using the gallery space to its full potential. It was also successful in giving the Stanley Picker a higher profile and appealed to people who might not traditionally visit contemporary art exhibitions,â€ he said.