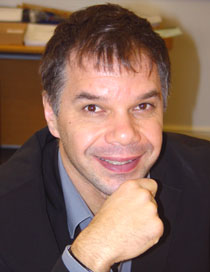 A Kingston academic is heading to the United States after being awarded a prestigious visiting fellowship at Princeton University. Dr Vassilis Fouskas, from the Faculty of Arts and Social Sciences, will be based at the Ivy League university in New Jersey for three months. He intends to spend his stay examining the role Britain and the United States played in the Balkans and Near East in the aftermath of World War I.

Dr Fouskas said it was a tremendous honour to be chosen as a fellow. â€œPrinceton is one of the worldâ€™s leading universities and Iâ€™m proud and privileged to have had my research application accepted in the face of stiff international competition,â€ he said.

The Western Powersâ€™ influence on the formation of such countries as Greece, Turkey, Egypt, Iraq and Saudi Arabia will form a major focus of Dr Fouskasâ€™ Princeton studies. The Universityâ€™s vast library collection would be an invaluable resource for investigating American foreign policy during and immediately after the war, he said. â€œI will have access to Government papers not available anywhere else in the world. The material will allow me to gauge the attitudes of the State Department and White House chiefs of staff in that era and determine their motives for becoming involved in the countries concerned,â€ Dr Fouskas said.

Research will not be the only activity on Dr Fouskasâ€™ itinerary. He is also set to deliver seminars on 20th Century history and international relations to Princeton staff during his visit. â€œIâ€™m looking forward to working with some of the worldâ€™s top academics and to the opportunity of sharing my own knowledge with such an elite group,â€ he said.