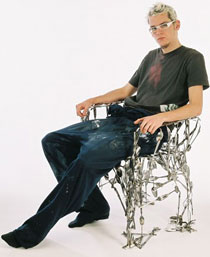 A Kingston University design student could soon be causing a stir amongst discerning diners in Britainâ€™s restaurants after creating a chair from used cutlery. Osian Batyka-Williams has welded together more than 150 knives, forks and spoons for his final-year project. He hopes his concept could soon be rolled out to seat patrons in some of the countryâ€™s top eateries.

Osian, who is completing a degree in product and furniture design, said a chance discovery that restaurants changed their cutlery every nine months inspired him to build the chair. â€œIt occurred to me that there must be a lot of waste cutlery out there because people donâ€™t usually want to buy second-hand knives and forks,â€ the 22 year old said. â€œThe obvious thing seemed to find a way to get restaurants to use this cutlery again and thatâ€™s how I got the idea to make chairs.â€ Osian, from Shoreham in Kent, spent six months collecting unwanted cutlery from restaurants and charity shops in South West London before setting to work. â€œItâ€™s taken a long time to get everything together and a lot of late nights creating my chair but all the hard work has been worthwhile,â€ he said. â€œThe chair is only a prototype and the design could be easily adapted for different types of restaurant.â€ Osian is now taking his design a step further – creating a cushion made from recycled napkins to make his chair more comfortable.

Senior lecturer in product and furniture design John Coles said Osianâ€™s cutlery chair was an inspirational design that could easily be manufactured. â€œOsian has an amazing creative spark and, once he has an idea in his head, he always goes that extra mile to realise his vision. He has also considered wider issues such as the importance of sustainable design and that foresight will ensure he has a very bright future in the industry,â€ Mr Coles said.

Furniture fans will be able to put Osianâ€™s cutlery chair to the test when the University hosts its annual Faculty of Art, Design and Music Degree Show next month.