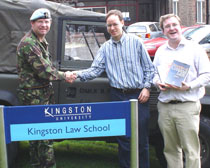 A consignment of books from the Law School is being shipped to Sierra Leone to bolster efforts to rebuild the African state's legal system after years of civil war. The assortment of law journals and other texts donated by senior lecturers John Tribe and Eric Jeanpierre is being transported to the capital city Freetown by the British Army.

The books were collected from the Kingston Hill campus by Mr Tribe's father, Royal and Electrical Mechanical Engineers Captain Allan Tribe, earlier this semester. They are due to arrive in Freetown, where the British Army is based, at the end of May. Once unpacked, the contents will be distributed to courts and education facilities. "The country is desperately poor and urgently needs resources," Mr Tribe said. "The courts, in particular, were heavily vandalised during the civil war and are virtually starting again from scratch." The University's gesture has been matched by a large donation of books from Kingston Crown Court. "The result has been a brilliant team effort," Mr Tribe said.

Captain Tribe is confident the project will make a real difference to Sierra Leone's recovery from a decade of civil war. "The country has been through so much and hopefully this project will go some way towards helping it get back on track," he said. The Law School and Army are now making plans to fly a further batch of books to Belize in Central America.