Makeover for study of interior design

Makeover for study of interior design 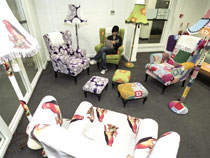 Kingston academics are preparing to step back in time to explore the history of interior design. The Centre for the Study of the Design of the Modern Interior is the first in the United Kingdom to look at the ways people have fitted out their homes since the mid-19th Century. Headed by Pro Vice-Chancellor for Arts Professor Penny Sparke, centre researchers will also examine the development of decor in offices, banks, shops and even in railway stations and cruise liners.

The experts intend to focus on the factors that have influenced interior design since furniture, carpet, china, pottery, glass and chandeliers were first showcased at the Great Exhibition in 1851. â€œSince that time, interior professionals such as architects, decorators and upholsterers have gradually emerged to join the amateur homemaker,â€ Professor Sparke said. â€œNow interior designers have taken on a leading role in shaping homes, offices and public places.â€ Retail giants such as Ikea had capitalised on this growing trend, she added. â€œWe plan to examine where people have traditionally bought their furniture and fittings and how countries such as Sweden and the United States have come to dominate the market during different periods,â€ Professor Sparke said.

The popularity of makeover shows such as Changing Rooms and House Doctor on television reflected the growing influence of interior design, Professor Sparke said. â€œPeople have become much more conscious about the look and feel of their homes,â€ she said. â€œIn fact, furnishings have become just as important as clothes and cars in making a statement about who we are or who we aspire to be. Our researchers hope to discover how this material culture has helped people form their identities.â€

The research team includes two visiting professors from the United States – Dr Alice Friedman from Wellesley College in Boston and Dr Pat Kirkham from the New York-based Bard Graduate Centre for Studies in the Decorative Arts, Design and Culture. The Centre was officially launched at the annual Dorich House Conference, which this year was entitled Modernity, Modernism and the Interior 1870-1970.