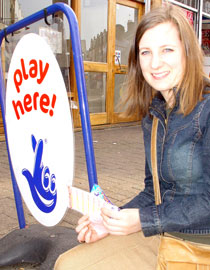 The age-old stereotype of men frittering away their hard-earned cash in betting shops could soon no longer hold true, new research has found. A Kingston study suggests that these days women are just as likely to fancy a flutter, particularly when it comes to the National Lottery. Dr Emma Casey, a senior lecturer in sociology, has been exploring the reasons that have prompted increasing numbers of working class women to turn to the lottery as a leisure pursuit.

Previous research into participation in the National Lottery had never explored links between gender and class, Dr Casey said. Her study had tracked the consumer habits of sample groups of working class women from Lewisham in South London and Newcastle. The research had found that females were becoming just as likely to gamble as men. â€œAlthough men might still prefer to bet on horses and greyhounds, the National Lottery is a more accessible form of gambling for women,â€ Dr Casey said. â€œFemales with hectic lifestyles can buy a ticket at a petrol station or supermarket, for example, without having to go out of their way.â€

The results also dispel the belief that the lottery encourages addictive behaviour and wasteful spending. â€œThere may be a small proportion of players who become hooked but, for the majority, buying a ticket is nothing more than a bit of fun and gives them something to look forward to,â€ Dr Casey said. The study revealed that women had generally already planned how they would spend the jackpot if their ticket was a winner. â€œMental pleasure is gender specific and women are clearly driven by how their lives could change if their numbers were to come up,â€ Dr Casey said.

The National Lottery Commission is now considering Dr Caseyâ€™s proposal to take the study a stage further. She hopes to generate the countryâ€™s first database of female lottery players if given the go-ahead.