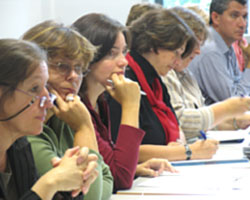 The annual event, which included talks by Kingston Professor Richard Ennals and childrenâ€™s author Alistair Daniels, provided delegates with a chance to share information about their approaches to teacher training and learn from methods developed in other countries.

Senior lecturer Urszula Basini, who co-ordinated the event hosted by the School of Education, said it had provided the 50 participants with a vital opportunity to network, pool ideas and explore plans for future co-operation.

â€œThey discussed the effects of European directives on teaching practice, designed courses capable of attracting EU funding and drew up plans for projects which included an initiative to link Schools of Education in both Europe and Asia,â€ she said.

Visits to classrooms around the borough were also included on the itinerary, allowing delegates to gain a first-hand glimpse of British schooling in action.