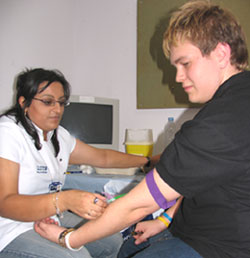 Kingston students have stepped forward in force to boost the number of bone marrow donors in the United Kingdom.

More than 200 undergraduates have given blood samples at a testing clinic at the Studentsâ€™ Union as the first part of a process to determine whether they could one day provide the perfect match for patients needing transplants.

The clinic was organised by third year illustration students moved by the plight of course mate Selina Ramanah, who is seriously ill with leukaemia in St Jamesâ€™ Hospital, Leeds. Selinaâ€™s best friend, Karen Hall, said she had been overwhelmed to see so many people rallying to the cause.

â€œIt was really touching to find that they had taken Selinaâ€™s situation to heart and were determined to do their bit to see if they could be a suitable donor either for her or another person with a life-threatening illness,â€ Karen said.

The testing session was staged in conjuction with the Anthony Nolan Trust, the national charity specialising in finding bone marrow donors. Donor recruitment manager Azra Iqbal said she had been very impressed to see so many students eager to help out. â€œThe response was fantastic and a real credit to students attending Kingston University,â€ she said.

Studentsâ€™ Union Vice-President for Student Support Chris Ford said he hadnâ€™t had to think twice about pursuing the possibility of becoming a donor. â€œIt was very rewarding to know that such a simple gesture as giving a blood sample could one day lead to me being able to make a big difference in someoneâ€™s life,â€ he said.