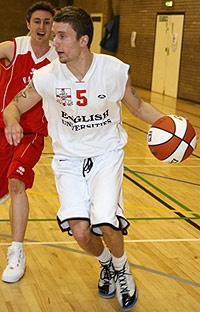 Two Kingston University students are celebrating winning the British University Games basketball competition. Stephen Vear captained the England squad and was voted the most valuable player of the tournament for the second year running by the coaches and team managers of the four national teams. Walid Mumuni was also one of the five-strong team that slam-dunked their way to victory beating the teams from Scotland, Wales and Northern Ireland to take the cup.

The games, which took place at the University of Swansea from 10 to 13 April, drew the best talent from universities across the United Kingdom with students competing for their country in different sports including hockey, athletics and football. The games are seen by athletes as a springboard to becoming professional sportspeople and top trainers attended the contest to scout for potential talent.

Third year sports science student Stephen Vear, 23, first became interested in basketball when he was six years old but took the sport up seriously at the age of 14. He now plays semi-professionally and hopes to make it his career. â€œMy dream is to be chosen for the Great Britain squad and travel to Bangkok in 2007,â€ he said. Vear is extremely proud of the teamâ€™s unbroken record. â€œEngland has won the competition for several years on the trot and I have been part of the team twice before so this has been a personal hat trick for me,â€ he added.

The England team was strong and united in spite of the fact that the players had come from across the country and so werenâ€™t able to practise together frequently, Vear explained. â€œItâ€™s a challenge to pull a team together in such a short space of time when most of the players donâ€™t really know each other beforehand,â€ he said. â€œIt does help, though, that the players regularly meet on the basketball circuit so, to a certain extent, they learn how to play as part of a team by actually competing against each other.â€

Walid Mumuni, 23, also in his final year of a sports science degree, has been playing basketball for Kingston University for three years. He believes the profile of British basketball has increased and is looking to stay in England to play professionally. â€œMost people think of basketball as an American sport but itâ€™s really growing in popularity in this country,â€ he said. â€œFewer overseas players are coming to England which gives more of our home-grown talent a chance to flourish. The British University Games provides the opportunity to prove that English basketball players can become world class too.â€

Stephen Vear and Walid Mumuni are part of the Kingston University Talented Athlete Scheme which offers special support to students who compete at a national or international level in sport. Among the benefits are free fitness centre membership and sports massages, discounted osteopathy and sports therapy and bursaries to cover competition expenses.