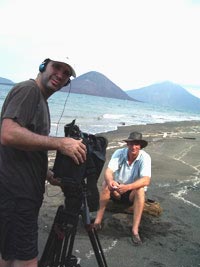 A ground-breaking study by a Kingston University research team into why volcanoes erupt will form the basis of a new BBC2 documentary about Krakatoa to be aired on May 7 at 10.30pm. The programme also considers whether modern technology could help predict similar disasters in the future. It will accompany a drama entitled The Last Days based on the startling events surrounding the volcanoâ€™s eruption which left more than 40,000 dead. Â

The documentary follows the work of a team led by Professor Nick Petford from the Universityâ€™s Centre for Earth and Environmental Science Research. Also featured are: Professor Eddie Bromhead from the Faculty of Engineering and PhD student Mark Thomas.Â  The team created computer models which were used to analyse rock samples that Professor Petford brought back from the Krakatoa site. The researchers were then able to estimate volcanic strength and the likelihood of an eruption or a collapse. Using these findings, the Kingston team built a theory about why Krakatoa erupted in such a violent way, although their findings are under wraps until the programme is shown. Heard more than 3,000 miles away, the final eruption is believed to be the loudest sound ever heard by mankind and tens of thousands perished in the tsunamis it generated.

Professor Petford said the BBC had chosen to feature Kingston because of its cutting-edge research methods. â€œThe University is at the forefront of research into the collapse of volcanoes,â€ he said. â€œThere are only a handful of research centres in the world that have the facilities to analyse in this format, using specialist software. The work weâ€™ve done could have major implications on future hazard management because the more understanding we have about volcanoes now, the better weâ€™ll be at predicting eruptions in years to come.â€