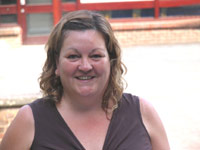 Students hoping to secure a course place at Kingston University during Clearing will need to be quick off the mark this year. The University has seen a 6.3 per cent increase in applications for its degrees compared to 2005, despite this being the first year when the Governmentâ€™s top-up fees come into play. More than 30,000 students had applied by 30 June indicating that the scramble for places, particularly on the most popular courses, will be fiercer than ever.

Kingston University principal lecturer Nicola Aries is more aware than most what a tense time this is for students and their parents. As well as being the admissions tutor for the Universityâ€™s School of Law, Ms Aries is also a mum whose three children have all experienced the agonising wait for A-Level results before heading off to university. Her youngest daughter will be going through the process this year and Ms Ariesâ€™ advice to students in this position is simple – do some preparation. â€œThe hard work of exams will seem a long time ago, but reality is about to hit,â€ she said. â€œNot knowing what the future will hold can be quite unnerving but what Iâ€™ve suggested to my daughter is that she should have a campaign plan ready for each potential outcome when her results arrive. That way there wonâ€™t be a mad panic if things donâ€™t go quite the way she hopes.â€

Ms Aries also advised students to programme university hotline and confirmation numbers into their mobile phones so that they could get on the line as soon as they had the results in their hands. â€œIf students get the grades they need for their firm or insurance offer, it is important that they quickly ring the institutions to confirm their places,â€ she explained. â€œWhat is even more critical, though, is that they also have at the ready Clearing hotline numbers for other universities they are interested in so they can make early inquiries. Places on the most popular courses are usually snapped up in the first couple of hours after the lines open.â€ Being flexible about courses would also help, Ms Aries said. â€œDecide beforehand what you will do if the course you want is full and investigate related courses as you could find one that is just as appealing,â€ she said.

A former Kingston student, having completed a law degree at the University in 1998, Ms Aries lectures at the Universityâ€™s School of Law and has been involved in Clearing for the past six years. As admissions tutor, in addition to dealing with students wishing to study Law at Kingston, Ms Aries is also responsible for running open days and organising talks at schools and colleges. She admitted she was often surprised by how unprepared students were. â€œMany students ring us in a complete panic. We are keen to make sure they get on to the best course for them so itâ€™s vital they keep calm and have all their qualifications to hand, including their GCSEs,â€ Ms Aries said.Â  â€œWe can only speak to the student themselves and weâ€™ll be looking for signs that they really want to come to Kingston and are realistic about which courses their results will allow them to study.â€

Kingston Universityâ€™s Clearing hotline operators are primed to receive up to 6,000 calls from students eager to snap up the few remaining places on its courses once the lines open at 8.30am on results day.Â  â€œAt Kingston, students will speak first to specially trained hotline advisers, who are all university students,â€ Ms Aries said. â€œMany of them came through the Clearing process themselves so can really empathise with the callers. Students with the right grades will then be transferred through to academic staff.â€ Any students who didnâ€™t meet Kingstonâ€™s course criteria would receive advice about alternative courses, including two-year Foundation Degrees and HNDs run in conjunction with partner colleges in the region, Ms Aries confirmed.

UCAS applicants without a university place on 17 August will automatically be posted a Clearing Passport, however, they should not wait for it to arrive in the post before approaching institutions, Ms Aries said. Instead, she advised students to draw up a shortlist of courses that interested them.Â On A-Level results day, official lists of course vacancies will also be published in the Independent, the Guardian and on the UCAS website.