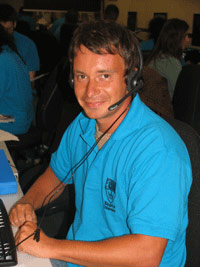 Despite leaving school with only GCSEs, thirty year old aspiring magazine editor, Paul Cannon, was eager to be one of the first students to sign up for Kingstonâ€™s new degree in journalism. He was adamant his life needed to take a new direction after working for 10 years in London as a document controller, but having never gone to college he was anxious he would find it hard to secure a place.Â

â€œBecause Iâ€™d been so eager to earn money I left school with just GCSEs and I was really worried this might be a problem,â€ he said.Â  â€œOnce Iâ€™d made the decision to study for a degree I called the Clearing number at Kingston early as I knew there would be a rush when A-level results came out.â€Â  Paul was put straight through to the Faculty and was struck by how friendly they were – they really took an interest in me and what I wanted to do.Â  I had an in-depth telephone interview and was asked to submit a written piece.Â  When I was offered a place two weeks later I was so pleased because I was one step further along the path to my new career.â€Â  Now at the end of his third year, Paul has a portfolio brimming with cuttings including a lead article published on the front cover of his local paper.

Paul is also part of the 40-strong team manning the Kingston Clearing hotlines from 17 August.Â  He wanted to get involved because he felt having gone through the experience of Clearing himself he could offer valuable advice to other students.