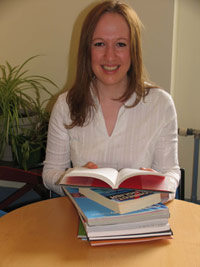 Kingston University has named the first winner of a scholarship commemorating a former student killed in the 7 July bombings. Tanya Cunningham, who has just completed the second year of her law degree, intends to use a Â£5,000 grant from a travel scholarship set up as a tribute to Kingston business graduate Philip Russell to undertake voluntary charity work in Cambodia.

The scholarship scheme was established after Philip, a keen traveller who completed a BA in Business Studies at the university in 1998, died following the explosion aboard a Number 30 bus in Tavistock Square. The 28 year old, who grew up in East Peckham in Kent, had been on his way to work at JPMorgan Asset Management in the city at the time. Contributions from Philipâ€™s family, friends and colleagues have been matched by his employer, swelling the total scholarship fund to almost Â£60,000.

The award will allow 23-year-old Tanya to fulfil her dream of spending six months in Cambodia working on humanitarian projects for the charity Legal Services for Children and Women. â€œThe legal system in Cambodia was virtually wiped out during the Khmer Rouge regime and I hope that, in some small way, Iâ€™ll be able to play a part in rebuilding it,â€ she said. â€œI plan to spend at least three months on the road assisting women and children who have been victims of exploitation and human trafficking which will give me an important insight into the challenges they face readjusting to society.â€

Three second year students from the Universityâ€™s Faculty of Arts and Social Sciences have also benefited from the first award allocation. Dominic Stevenson, Danielle Nicholls and Simon Cartlidge each received special grants of Â£1,000 to work with children being cared for by the Esther Benjamins Trust in Nepal.

Philipâ€™s father, Grahame, and mother, Veronica, who both sat on the scholarship selection panel, said they had been extremely impressed by the calibre of the applicants. â€œPhilipâ€™s death is a tragedy from which the family will never recover, but to have been given the ability to create a memorial that will further the education of some while benefiting those less fortunate is, in itself, a fitting tribute to his name,â€ Mr Russell said. â€œPhilip spent four happy years at Kingston University immersing himself in student life. The friends he made and the memories he created would have undoubtedly remained with him forever.â€

JPMorgan Asset Management global chief executive officer Paul Bateman said Philip had made an enormous impression during the two years in which he had worked as a team leader in the companyâ€™s new business proposal group. â€œPhilip was a high-achieving individual responsible for new business tenders for institutional and wholesale clients and his death in such tragic circumstances was a major loss to both the company and his colleagues. We are privileged to have been able to work in partnership with the Russell family and Kingston University to honour Philipâ€™s memory through the establishment of the travel scholarship programme,â€ Mr Bateman added.

The Universityâ€™s alumni and events manager, Dr Helen Trott, said she had been moved by the commitment Philipâ€™s family and colleagues had shown in ensuring the scheme was established in time to mark the first anniversary of his death. â€œTheir determination to see Philipâ€™s name live on will give Kingston University students an invaluable opportunity to broaden their understanding of the world around them through travel and enable them to support people less fortunate than themselves for many years to come,â€ she said.