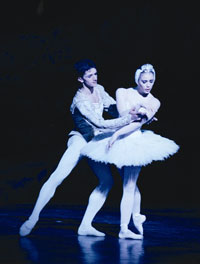 A principal dancer with some of the worldâ€™s biggest ballet companies has bowed out of the limelight to take up studies at the Faculty of Health and Social Care Sciences. Inspired by the professionals who helped him overcome injury during a dancing career spanning almost 20 years, Vladislav Bubnov is now part-way though a degree in physiotherapy.

Having dedicated his life to ballet since he was nine, the 37 year old admits it has taken a little time to adjust to a routine that no longer revolves around rehearsals and performance. However, he is confident he has made the right move.Â  â€œGoing to university is completely new for me and I love all the challenges it brings,â€ he said.

Mr Bubnovâ€™s coursemates have no doubt that he has the stamina to see his studies through. He spent eight years mastering all the elements of classical dance at the Bolshoi School of Ballet in Moscow before joining the company itself and rising rapidly through the ranks.Â  Although the training was physically and mentally demanding, Mr Bubnov said the thrill of performing in front of a live audience made it all worth while.Â  â€œGetting a response and experiencing the chemistry of a crowd is the best feeling in the world,â€ he said.Â  â€œI was taught from a young age to always do my best but it takes a real love of dancing to cope with the pressure.Â  Luckily I was always able to get back on my feet and was given some wonderful roles including the Prince in Swan Lake and the lead in Romeo and Juliet.â€

Mr Bubnov first visited England in 1987 on tour with the Bolshoi company. He later spent nearly nine years with the Scottish Ballet, before a six-month stint with the Liepzig Ballet in Germany and five years with the English National Ballet.Â  As retirement loomed, he began to give more thought to the work of the physiotherapists who had always played a part in keeping him in prime condition throughout his performance career.Â  â€œI had always been in awe of their skill and knew by following in their footsteps I would have an ideal opportunity to make the most of my talent and knowledge,â€ he said.

After hanging up his dancing shoes for the final time, Mr Bubnov set to work pursuing his goal. He found out more about the physiotherapy programme run in partnership by Kingston University and St Georgeâ€™s, University of London, and decided to apply. â€œI was attracted to the course because of its hands-on, practical approach to learning,â€ he said. â€œNot having English as my native tongue does make everything harder for me – I always have a dictionary by my side.Â  But I need to be able to communicate with my patients and itâ€™s a hurdle Iâ€™m determined to conquer along the way.â€

Head of the School of Physiotherapy Christine Bithell praised Mr Bubnov for the dedication he had shown to adapting to university life. â€œHaving a renowned principal ballet dancer studying in our midst is a great coup,â€ she said. â€œThe different perspective and wealth of knowledge Vladislav has brought with him has been invaluable both for our staff and his fellow students.â€