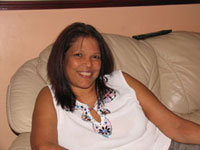 When Yvonne McMahon set her sights on becoming a social worker, she was determined nothing was going to stand in her way. Even a serious accident and a string of major illnesses could not keep her off course for long. Instead, she mustered all her strength and battled on, finally becoming the proud holder of a BA in Family and Child Care Studies and a Diploma of Social Work this year.

Mrs McMahon had already struggled through difficult times when she first enrolled to study at Kingston in 1997. Just three years earlier, she had lost her 10-year-old daughter, Karin, to the rare heart and lung disease pulmonary haemosiderosis. â€œAt first, my husband, Shane, my three sons and I, couldnâ€™t even talk about our grief,â€ she recalled. â€œIt wasnâ€™t until I started a group at our church for parents whose children had died that we really began to come to terms with what had happened – when we realised from talking to others that we werenâ€™t the only ones who felt so desperately alone.â€

Working with the group had another benefit, helping rekindle Mrs McMahonâ€™s long-held ambition to become a social worker. â€œI felt the experience of caring for my little girl until she passed away was one I could share with others. I also saw social work as a way for me to help empower people facing problems to become more independent and develop their own talents and strengths,â€ she explained.

After completing an Access course and a Higher National Certificate in housing studies, Mrs McMahon was accepted on to Kingston Universityâ€™s social work programme. However, just a year into her course, she had to put her studies on hold when a debilitating stroke left her partially paralysed.

Despite the setback, after a year of physiotherapy, Mrs McMahon was back at the books, little imagining further ill health lay in store. In June 2001, her progress was disrupted unexpectedly once more when she was badly injured in a motor accident. Barely three months later, she found herself in hospital again after suffering a heart attack. Further heart problems left her facing surgery for a blocked artery.

Mrs McMahon believes two factors were crucial in her recovery – the love of her family and her determination to finish her degree. â€œThere were times when I did get down,â€ she admitted. â€œThe accident meant I couldnâ€™t hand in some of my course work, so completion of my degree seemed even further away. But I was adamant I was going to get well and see my commitment through.â€ Three years later she has not only achieved that goal, but also graduated with the Tasnim Yawar prize, awarded annually to the student who most exemplifies the values of social work.

Head of the School of Social Work Hilary Tompsett said Mrs McMahon had been an inspiration to both her lecturers and her fellow students. â€œYvonne demonstrated remarkable spirit despite the difficulties she faced along the way and her adaptability and resilience have been an example to us all,â€ Mrs Tompsett said.