From District Nurse to Dean 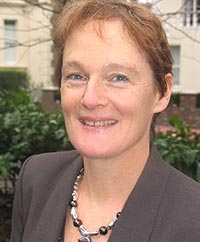 Putting people first will remain a top priority for the new Dean at the Faculty of Health and Social Care Sciences as she settles in to her job. Professor Fiona Ross, who assumed her new role in early January, says her passion for people is as strong as when she first entered the health profession as a district nurse more than 30 years ago. "I'm a people person first and foremost and that's one of the reasons I wanted to work in health in the first place," she said.

Professor Ross is determined to firmly establish the Faculty, run jointly by the University and St George's University of London, as a centre of excellence in both health and social care education and in research.

Meeting the needs of students is also one of her top priorities. "Students want to feel they are getting the most from their all-round university experience and we must live up to their high expectations," she said. "After all, our students are the best advocates of what we do."

A mother of three, Professor Ross is an Edinburgh University graduate and has a PhD from King's College London. She has worked in higher education since the early 1980s, when she was appointed as the Queen's Nursing Institute lecturer in community nursing at Chelsea College. She already has close connections with the joint Faculty of Health and Social Care Sciences after being involved in its establishment while working at the then St George's Hospital Medical School in the early 1990s. "This was a really exciting period as we were taking nursing into the university sector in the region for the first time, creating a solid partnership between the two institutions," she said. "I've always had enormous respect for Kingston University since those ground-breaking days."

More recently, Professor Ross has served as director of the Nursing Research Unit at the Florence Nightingale School of Nursing and Midwifery at King's College London. During her time there, the unit doubled in size, with a considerable increase in published research and income. Its staff also had a major influence on Department of Health policy development.

Now based back at St George's in her new role, Professor Ross said it was a privilege to have started the New Year joining a team known for its innovation in interprofessional education. She paid tribute to her predecessor, Acting Dean Kath Start, who she described as a driving force behind significant teaching and research developments. "Kath has done a fantastic job, particularly in helping set up new courses for paramedics and emergency care workers," Professor Ross said.

As well as heading the Faculty, Professor Ross will continue to serve as joint editor-in-chief of the Journal of Interprofessional Care and undertake a number of research projects.