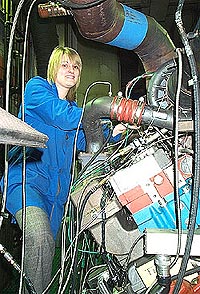 A Kingston University studentâ€™s drive to succeed in a male-dominated occupation has pushed her first past the finishing post to receive a major industry prize. Automotive engineering student Kiara Harper, 20, won an annual award run by car giant Ford and the Women Into Science and Engineering (WISE) campaign.

Set up to promote engineering as a career for women, the Ford WISE award recognises outstanding undergraduates in the penultimate year of their studies. As part of the selection process, Kiara had to explain to a panel of professional engineers how she would cope with working in an industry where men far outnumbered women. â€œIâ€™m the only girl on my course among 36 students, so it wonâ€™t be new. Iâ€™m quite a confident person so being the odd one out doesnâ€™t really worry me. More than anything, I think that women are missing out on great career opportunities by not choosing engineering,â€ she said. â€œMost of that probably goes back to girls having been brought up to believe that anything to do with cars and engineering wasnâ€™t for them.â€

Kiara has recently been helping to spread awareness about careers in engineering as part of her year-long work placement in Daventry with engine manufacturer Cummins.

â€œCummins takes part in a scheme to promote engineering in local schools and Iâ€™ve really enjoyed talking to pupils about my experiences,â€ she said. â€œIâ€™ve also brought in model cars to explain how an engine works and even got the kids to do practical things, like building small circuits and making traffic lights work.â€ It had been rewarding when some of the schoolgirls started to show a genuine interest in engineering as a career, Kiara said. â€œThey learnt that it isnâ€™t all about oily rags and overalls but is a highly technical profession, just as suitable for women as men. I wish someone had filled me in on the opportunities open to girls in this field when I was at school,â€ she added.

Kiara, from West Malling, Kent, said that her degree course at Kingston, where she has completed the first two years, had already left her well-equipped to make the most of her placement with Cummins. â€œIn the second year we spent a lot of time in the Universityâ€™s laboratories getting hands-on experience in stripping engines and road testing vehicles,â€ she said. â€œNow Iâ€™m learning to apply my skills to real-life situations in industry."

Away from the classroom, Kiaraâ€™s burning passion is motorsport. A regular at the Grand Prix, her most cherished ambition is to help design and test vehicles for one of the top Formula One teams such as McLaren. â€œMotorsport is one of the most competitive industries to break into and whether you are male or female you have to be at the very top of your field to stand a chance,â€ she said. â€œIâ€™m prepared to start at the bottom, though, and work my way up slowly.â€ Kiaraâ€™s tutor Denis Marchant, field leader in automotive engineering at Kingston University, said she was a fine role model for young women considering a career in engineering. â€œShe lives and breathes the subject and is always ready to help with open days and induction events,â€ he said. â€œKiara commands respect from all the men on the course because she is both assertive and a team player.â€

As this yearâ€™s Ford WISE prize winner, Kiara was presented with a cheque for Â£750 by CBI Director General Sir Digby Jones at the Young Women Engineer of the Year awards in London at the end of January.