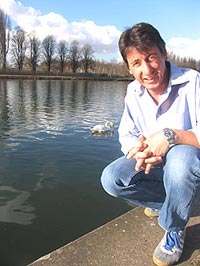 A Kingston lecturer has been using his expertise to help communities rediscover one of their most precious resources – rivers. Stuart Downward, from the University's School of Earth Sciences and Geography, has provided expert advice to the Environment Agency and local councils in a bid to restore ‘lost' rivers to urban environments and improve contaminated ones.

A healthy, attractive river plays a crucial role in urban regeneration as it allows people to forge a strong bond with nature and their surroundings, Dr Downward explained. "Rivers and parks are among the last bastions of nature in built-up areas. Authorities are now beginning to realise how important it is to protect and improve them," he said. "Rivers bring all sorts of benefits to communities, and not just in terms of making the environment more pleasant and encouraging wildlife. They have great educational value for schoolchildren, for example, and by encouraging people to walk or jog along them they also serve a recreational purpose."

Over the years many rivers have gradually been swallowed up by urban encroachment, Dr Downward said. "In some towns and cities, rivers have literally been forced underground and forgotten about, so people have become divorced from nature. It's part of my role to restore rivers to their former glory and recreate that link."

One of Dr Downward's proudest achievements has been in seeing his recommendations for improving the Wandle Park Channel in South-West London become reality. The Wandle has a distinguished history – it is mentioned in the Domesday Book and was once famous for the many mills lining its route. When called in to survey it ten years ago, however, Dr Downward found a filthy, clogged stretch of water stuck between ugly concrete banks.

"In the past, the council would probably have seen the river as a health hazard and built over it. Now there's more enlightened thinking," he said. "During a five-year period we removed the concrete and improved the water quality. It's now a clean river where wildlife flourish and heron come to fish." Another recent project saw South-East London's River Quaggy – once driven underground by urban sprawl – restored to Greenwich's Sutcliffe Park, where it now occupies a prominent position as a wildlife and wetlands area.

Dr Downward acknowledged there were also dangers with river restoration. "We have to consider the risk of pollution and flooding, especially in dense urban areas. There are also public safety issues – if someone fell in a river the council could be sued," he said.

There were likely to be even more dangers if nothing was done, though. By encasing a river in concrete, the problem of pollution, for example, was not being solved. "River restoration also means looking at the bigger picture and treating root causes of contamination, and not just burying the problem," he said.

Dr Downward is now hoping to advise on the clean-up and restoration of East London's River Lea, which is part of a multi-million pound regeneration project before the 2012 Olympics. "This is a huge opportunity to turn a long-neglected river into something special, and to show the rest of the world how a restored river serves both the environment and the whole community," he said.