Home > News > News articles > Tea for three at the BBC

Tea for three at the BBC

Tea for three at the BBC 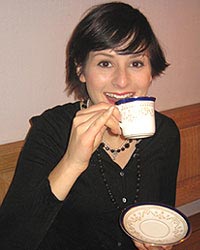 Reaching for a cuppa was all in a dayâ€™s work for Kingston University animation graduate Lucy Izzard, who has just scooped the top prize at the BBCâ€™s New Animator Awards. Lucy, 22, visited numerous tea rooms while making her short film Tea Total as part of her final year course work at Kingston. Buying herself a cup of tea and a cake, she would start chatting to customers about the merits of tea-drinking, recording their comments for the film.

Lucyâ€™s thirst for original research was rewarded when Tea Total saw off competition from hundreds of entries in the BBCâ€™s search for fresh film-making talent. The judges commended the warmth and wit of the film, in which a succession of animated characters discuss why nothing can quite compare to a refreshing cuppa.

â€œAlthough itâ€™s generally thought the British are reserved, the people I came across were happy to talk to me about the importance of tea in their lives,â€ Lucy said. â€œFor some, tea was clearly their favourite subject. I really wanted to make sure that all the voices in my film were genuine because I wanted the slightly eccentric side of British life to come across.â€ Tea Total is set to screen on BBC Three in March.

Australian-born Lucy graduated with first class honours from the Universityâ€™s illustration and animation degree course in 2005. â€œSince I moved to England as a young child, it seemed that everyone around me was obsessed with tea. This eventually gave me the idea for the film,â€ she said.

â€œI discovered that tea-drinking involves little rituals and ceremonies in daily life, which I found really amusing. Funnily enough, I didnâ€™t even drink tea until I started visiting tea rooms for my research. I preferred Ribena, although Iâ€™m definitely a convert now.â€ 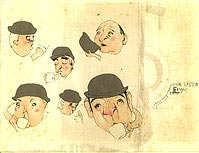 Despite a running time of just two and a half minutes, Tea Total features 24 drawings per second and took several months to complete. Now Lucyâ€™s hard work is set to pay even bigger dividends, with BBC Three commissioning her to make a series of short animated films. As well as tea-drinking, other slices of British culture such as politeness and queuing will come in for her tongue-in-cheek treatment. â€œItâ€™s really hard climbing the ladder in the world of animation, so winning the award has been an absolutely brilliant boost for my career,â€ she said. â€œItâ€™s fantastic that I can now count the BBC as a client and this new series will certainly keep me busy for the next few months.â€

Lucyâ€™s former tutor Jake Abrams, a senior lecturer in illustration and animation at the University, praised her winning film. â€œItâ€™s a tale of true Englishness with Lucyâ€™s quirky and imaginative style shining through,â€ he said. â€œKingston is proud of its record of producing graduates who go on to work in key creative roles in the broadcasting industry and Iâ€™m sure Lucy is the latest in a long line of graduates who have proven they are destined for big things.â€

Tea Total has also been shortlisted at the prestigious British Animation Awards. Entries from two other recent Kingston animation graduates, James Kirkham and James Sandifer, will also be vying for top honours.