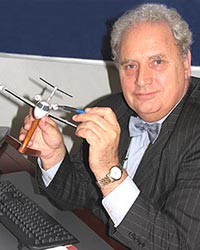 A leading academic and advocate of lifelong learning has been awarded an OBE for services to higher education. Professor Andrew Self, who is Kingston Universityâ€™s Pro Vice-Chancellor for Enterprise, received the accolade in the New Yearâ€™s Honours List. The OBE recognises his work developing a range of programmes which have put Kingston at the forefront of aircraft engineering training and enterprise in the United Kingdom.

Professor Self, 63, grew up in London, and left school aged 15 with no qualifications other than a heavyweight amateur boxing title to his name. Only later did he realise that dyslexia was responsible for severely affecting his reading and writing and his early aversion to schoolwork.

â€œAt school I would be constantly rapped over the knuckles with a ruler for not spelling correctly,â€ he recalled. Professor Self became aware of the educational opportunities open to him when he joined the RAF where he served for 12 years as a fireman. â€œI studied for my O-levels sitting in a fire engine and went on to win a top prize when I took my Higher National Certificate,â€ he said.

Following his academic success, he was invited by the Ministry of Defence to take a commission and found himself, as a Flight Lieutenant, teaching at RAF Locking, followed by a stint at RAF Cosford. He was awarded the Queenâ€™s Silver Jubilee Medal for setting up the RAF Midlands Museum and after receiving an MSc from Cranfield in guided weapons and control engineering, for which he won the Marconi Avionic prize, he was promoted to Squadron Leader at RAF Cranwell.

Seeking more stability after a life spent moving around the country, he entered the academic world in 1984, when he joined Brighton University. â€œIt was a natural move, really, since I was already teaching an MSc-level programme and undertaking research in avionics for the RAF,â€ he said. After his early experiences at school, Professor Self draws great satisfaction from the fact that he has now written 110 research papers, many of which have won commendations.

Professor Self joined Kingston University in 1994, soon becoming Head of the School of Engineering. His proudest achievements include helping the School to achieve the highest teaching quality award in the country and launching a series of vocational courses, including a Foundation Degree in Aircraft Engineering.

He puts the courseâ€™s success down to its role meeting national skills shortages for aircraft maintenance engineers, enabling students to obtain a degree, a licence and a guaranteed job. More than 80 per cent of the nationâ€™s aircraft engineers are now being trained on this programme.

Professor Self, who became the Pro Vice-Chancellor for Enterprise in 2003, has more recently turned his attention to his other passion in life – building profitable partnerships with industry, which he believes is crucial to the Universityâ€™s long-term success. Under his leadership and with the support of his colleagues, Kingston established an enterprise centre, with the goal of becoming as strong in that field as in teaching. â€œThe Enterprise Exchange started as a dream I shared with a colleague, and has now grown to a department employing 25 staff,â€ he said.

While he was immensely proud to receive an OBE, Professor Self said his chief ambition – to rekindle Britainâ€™s spirit of enterprise – still burnt as strongly as ever. â€œPutting knowledge into action is close to my heart. I like to see staff using their expertise to change company fortunes and feeding the experience back in to the lecture theatre,â€ he said.

â€œThere is great ingenuity in our country and I want to see that turned into prosperity again. If I can help someone take their ideas forward and market them successfully, then I feel as if I have truly done my job. Thatâ€™s not a bad record for someone who started out as a fireman.â€