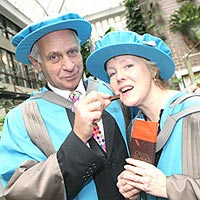 The ethical business methods practised by Jo Fairley and Craig Sams have done much to support and improve the livelihoods of cocoa farmers in developing countries. Their success has also prompted many multi-nationals to change the way they do business with Third World suppliers.

The entrepreneurial couple picked up their awards – each received an honorary Doctorate in Business Administration – at Londonâ€™s Barbican Centre last week. The accolade was the first they had received from an academic institution in recognition of their work. â€œOur success proves you can treat farmers fairly and still produce high-quality products that donâ€™t cost the earth. Itâ€™s a win-win situation in which everyone benefits – cocoa growers, manufacturers and consumers,â€ Ms Fairley said.

Green & Blackâ€™s was among the first companies to offer producers in the Dominican Republic and a co-operative of Maya producers in Belize a fixed price for their cocoa beans, guaranteed for up to five years. The move ensured farmers not only got a fair price for their produce but could also plan ahead rather than be subject to the fluctuations of world cocoa prices. The result was that they invested in production improvements and in the education of their children.

Since 1996, the Maya have planted more than 1,000,000 cocoa trees to keep up with the demand from Green & Blackâ€™s, which is now the leading brand of organic chocolate in Britain, the United States and Australia.

Mr Sams said Green & Blackâ€™s had demonstrated it was possible for businesses to put something back into the communities from which they had derived their income. â€œI take pride in the fact that we have made it possible for people to stand up in the boardrooms of big corporations and ask what the ethical consequences of a business decision are, without being fired,â€ he said. Since selling the company to Cadburys, the couple have been concentrating on other business ventures, which include running an organic bakery in their home town in Hastings, Sussex.

Dean of the Faculty of Business and Law Professor Gwyneth Pitt said it was fitting that the University was honouring two people who had made such a significant contribution to the fair trade movement. â€œKingston has a history of championing sustainable development and ethical business, so we are particularly delighted to be the first university to recognise the achievements of this pioneering couple,â€ she said.