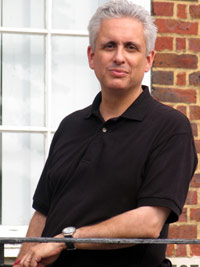 A principal lecturer from the Faculty of Engineering has added a leading role within the International Space University to his academic credentials.Â  Dr Chris Welch is the only British expert to have been appointed a faculty member of the institution in the past decade.

Highly regarded in the sector for his expertise in astronautics and space technology, Dr Welch joined the staff at Kingston 18 years ago. He described his appointment as a tremendous honour which would ensure Kingston University remained at the forefront of space-related education in the United Kingdom. â€œI am very excited at the prospect of having greater input into the running of such an intercultural and interdisciplinary institution, which draws together professionals and students from all backgrounds and cultures.â€

The International Space University provides graduate-level training at its central campus in Strasbourg, France, and at locations around the globe.Â It specialises in disciplines ranging from space science and systems engineering to policy and legislation.Â Agencies such as NASA and the European Space Agency are heavily involved in its programmes and Dr Welchâ€™s fellow faculty members include researchers from McGill University in Canada and the Harvard-Smithsonian Center for Astrophysics in the United States.

Kingston University is the only affiliate of the International Space University in the United Kingdom and has contributed more students to its summer schools and Masters programmes than any other institution in the country.