School safety project is backed by the Suzy Lamplugh Trust

School safety project is backed by the Suzy Lamplugh Trust 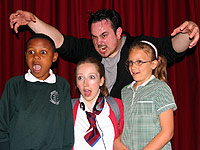 The Suzy Lamplugh Trust is supporting a Kingston University Studentsâ€™ Union initiative set up to make primary school children more aware of the potential dangers posed by strangers. The Trust backed the project that has seen student volunteers from the University visit 20 schools in the Kingston area to spread the message about personal safety by performing a modern-day take on the classic fairytale Little Red Riding Hood.

Written and produced by Studentsâ€™ Union volunteering development co-ordinator Catherine Attridge, the production Stop Red! Keep Safe was rolled out across the borough after being piloted in selected schools two years ago. The drama tells the story of Red, who is distracted listening to music and playing computer games with a friend instead of going straight to her grandmotherâ€™s house after school. Setting out after dark, she encounters a wolf who tries to win her trust with the promise of tickets to a concert. â€œThe underlying messages are extremely serious but they are explored in a fun way so the children donâ€™t realise they are being taught a valuable lesson,â€ Ms Attridge said. â€œThe action stops just before the end of the play and the children are asked to decide what Red should do to stay out of harmâ€™s way. By giving them responsibility for the final scenes, the children feel stronger and more empowered to take responsibility for their own safety and that of their friends.â€

Suzy Lamplugh Trust spokesperson Lizzie Bruce said, despite safety awareness being included in the national curriculum, more still needs to be done to raise awareness, particularly at primary school level. Set up in 1986 following the disappearance of 25-year-old estate agent Suzy Lamplugh, the Trust is marking its 20th anniversary by stepping up activity to educate young people about personal safety issues.Â  â€œWe were extremely impressed by the thought that had gone into the Kingston Studentsâ€™ Union production,â€ Mrs Bruce said. â€œUsing an adaptation of Little Red Riding Hood helps children to engage instantly with characters with whom they are already familiar. The messages in the play also reinforce the points the Trust is promoting in its Safe Schools Charter.â€

The showâ€™s audiences have included more than 90 pupils from Moor Lane Junior School in Chessington. Deputy head Neil Meehan said staging the performances in the run-up to the summer holidays had given pupils a timely reminder about taking extra care when they were out and about.Â  â€œThe children will soon be running around enjoying their freedom, so a lesson in looking out for themselves is very important at this time of the year,â€ he said.Â  â€œThe Studentsâ€™ Union volunteers are to be commended for the contribution they are making in the community through this project.â€