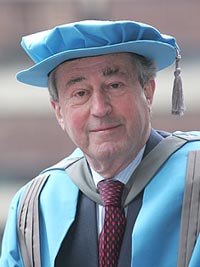 A prominent human rights lawyer, whose long and distinguished career has included a succession of influential high-profile cases, has been awarded an honorary doctorate by Kingston University. Geoffrey Bindman, who is the founder of civil liberties law firm Bindman & Partners, represented Amnesty International in the fight to extradite Chilean dictator General Pinochet to Spain. He also defended Private Eye magazine in its libel battles with business tycoon Sir James Goldsmith and acted on behalf of Clive Ponting in the Belgrano sinking case.

The 73 year old solicitor has consistently championed human rights in the UK and abroad by playing a leading role in several human rights missions in trouble-spots such as South Africa, Uganda, Northern Ireland and the Occupied Territories. After collecting his Doctor of Laws award at Londonâ€™s Barbican last month the well-known lawyer said he felt honoured to be recognised in this way. â€œKingston University has demonstrated the importance of human rights by conferring this award on a lawyer specialising in this ever more important field,â€ he said.

Holder of the Liberty and Law Societyâ€™s Gazette Lifetime Achievement Award for Human Rights, Bindman has played a significant role in pushing civil liberties up the political agenda, lecturing all over the world and writing and speaking in the national and legal media.

He also advised Kingston on the launch of its own MA in Human Rights in 2004, which trains students for roles in organisations working in the field and gives existing human rights practitioners the chance to carry out research in their specialist areas. Human rights experts teaching on the course include former barrister and current Head of Campaigns for Amnesty International, Steven Bowen.

A firm supporter of the recent Human Rights Act and the International Criminal Court, Bindman said the United Kingdom should be setting an example to the rest of the world. â€œWe need to maintain our values - the rule of law, fairness to the individual and a right to human dignity – traditions which go back to the Magna Carta,â€ he said. Following the tragic events in London last July the role of human rights lawyers had come under the spotlight, he said. â€œIt is important thatâ€™s peopleâ€™s understandable distress isnâ€™t allowed to lead to violations of human rights and miscarriages of justice,â€ he added.

Kingston Universityâ€™s Dean of Business and Law Professor Gwyneth Pitt said that it was fitting that Geoffrey Bindman receive the accolade. â€œThe total dedication shown by Geoffrey Bindman to the cause of human rights and his success in defending peopleâ€™s basic rights and freedoms throughout his outstanding career made him a perfect candidate,â€ she said.