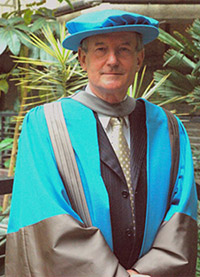 Kingston University has honoured a distinguished parliamentarian and education advocate. Barry Sheerman MP was born in Sunbury on Thames and is a former student of Kingston College. The Huddersfield MP collected his Doctor of Education at a graduation ceremony held at the Barbican Centre in London in January. The accolade recognised his passion for improving education in this country and celebrated his commitment to public life.

The long-serving Labour back bencher has held a lifelong passionate interest in education. He is known as a forthright member of the house where he recently challenged Prime Minister Tony Blair on how planned secondary education reforms would help disadvantaged children.

Mr Sheerman said he was delighted to receive the award and had many happy memories of studying in Kingston College where he took his A Levels before winning a scholarship to the London School of Economics. â€œIt was an intellectually exciting period in my life. I had been working in industry before deciding to study in Kingston,â€ he said. â€œI moved into politics because I wanted to improve childrenâ€™s lives. I believe that whatever background a child is from, they must be allowed to develop to their full potential. It makes me proud to have had my efforts recognised by Kingston in this way.â€

Barry Sheerman graduated from the London School of Economics with a BSc in Economics and an MSc in Sociology. He lectured in American Studies at the University of Wales, Swansea from 1966 to 1979, and since then has been a Member of Parliament for Huddersfield.

Dean of the Faculty of Arts and Social Sciences Professor Gail Cunningham said Mr Sheermanâ€™s commitment to the democratic system was demonstrated by his outstanding record of active participation in parliamentary debate. â€œBarry is known as an MP that consistently strives to use his political position to stimulate change for the better,â€ she said. â€œHis passionate and proactive support spans a wide range of issues. He has run successful campaigns on the introduction of seat belt legislation, changing the laws on child prostitution, smoking in public places and the standards of opinion polling.â€

Kingston Universityâ€™s Head of School for Education Andy Hudson said it was fitting that Mr Sheerman had been recognised for his contribution to education, which had included positions as chair of the House of Commons Select Committee on Education and Skills and founder of the all-party University group. â€œI am delighted that the University has honoured Barry,â€ he said. â€œI sincerely hope that he will be able to join us in future initiatives as many students will benefit from his wisdom and experience.â€