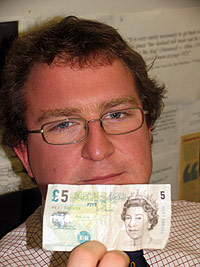 The assistant director of Kingston's Centre for Insolvency Law and Policy has cast doubt on suggestions that bankruptcy is on the rise because it is regarded as an easy way to escape financial woes. In a pilot study released earlier this year, senior lecturer John Tribe, who is based at Kingston's Law School, found that many debtors in England and Wales would go to great lengths to avoid being declared bankrupt. He also noted that the causes were far more complex than sometimes perceived.

More than half the respondents sampled as part of the Bankruptcy Courts Survey 2005 attributed their predicament to an inability to manage credit, Mr Tribe said. Business failure, divorce, illness and redundancy were the next most-frequently cited factors. Commissioned by the Insolvency Service as part of its evaluation of Enterprise Act reforms that came into effect in 2004, the report concluded that most individuals declared bankrupt felt they had little if any practical alternative.

Modifications to the Enterprise Act had brought the discharge period for bankrupts down from three years to one, reducing the time they had to wait to once again become eligible for credit, Mr Tribe said. However, the research had demonstrated that changes to the law had not made being declared bankrupt any more palatable a prospect. "There appears to be as much of a stigma attached to bankrupts as there was 500 years ago when they were labelled ‘evil-minded' by the Bankruptcy Act of 1543," Mr Tribe said. "It is certainly not as easy an option as some lending institutions would make out – in fact most people would do anything to avoid becoming bankrupt to the point where some take drastic measures."

Given a 30 per cent rise in bankruptcies between the second and third quarters in 2005, Mr Tribe maintains that the conduct of lenders should be reappraised. "A credit agreement is a two-sided contract and therefore it could be argued that both the debtor and the bank are equally culpable. Some of the 995 bankrupts I interviewed had been given credit when it was clear they were in no position to make repayments," he said.

A dearth of researchers studying personal insolvency in the United Kingdom was worrying given the growth of debt nationally, Mr Tribe said. "This means Britain lacks a lobby group similar to that in America where there are more academics specialising in insolvency acting as a watchdog on financial institutions. Without being held to account, unscrupulous lenders could encourage an overly easy credit environment," he said.